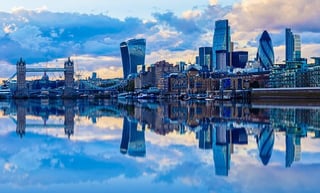 As is now traditional, HPE follows the US Thanksgiving celebrations with its Discover event in Europe. Just last week thousands of loyal HPE users, potential users, and a bunch of market watchers turned up in London's Docklands to hear what the company had to show and tell.

Taking a hint from the [surprising] local weather, HPE sported a decidedly sunny disposition all week. Perhaps that's to be expected after the HP split and the more recent - ongoing – spin-out/mergers of the software and services parts of the business. This is clearly a middle-aged company that has shed weight...the question now is how nimble and nifty it can be while remaining both valuable and invaluable to its customers. I add some extra commentary below, but first please take a look at the video blog I put together at Discover - a quick skim across a very large pond.

Of course, the assertions and promises during the event were many and varied…..but, to be fair, I was involved directly with numerous customers (both privately and on panels) who were reporting – and expecting – great results for their organizations from deploying and working with HPE. The message that “Everything Computes” but “we don’t do it all” seemed to resonate pretty well. That said, HPE is not the first company to try the "by doing less we can actually offer you more" mantra. I hate rolling out the old adage that “only time will tell," so - while it may also be true here - I will instead say that our increasingly hybrid IT world makes the HPE claim simultaneously potentially more applicable (users want flexibility and choice) and also more credible (many existing and potential partners obviously want to work with HPE) than it might have been a few years back. Interestingly and clearly, however, the 'one-stop-shop' IT systems vendors are not anything like the same approach: just look for examples at Dell EMC, IBM, Cisco, Oracle, Amazon, and Google if you want to see a whole range of approaches!

While the big external picture of HPE changes, it is also changing itself under the covers – for instance, returning to more of a Business Unit internal alignment than a more purely functional one. Does that matter? Well (sorry….I have to say it) only time will tell. The people and teams at HPE have had a bunch of change to cope with over the last few years - I suspect that not only are they somewhat accustomed to it now, but also that the corporate apparatus is so big, complex and entrenched that a splash at the top barely registers a ripple by the time it spreads across the entire company. In a business that - despite all the splits and divestitures - is still some $30 billion of revenue, that “organizational muscle memory” is both a massive strength and a potential weakness. Change has to be a constant to succeed as IT becomes truly mature; inertia cannot be allowed to curtail it. One can have all the Hybrid Clouds, Digital Transformations, and [even] Intelligent Edges one likes but phrases alone are unlikely to outdo products and abilities in IT just yet. And so this means that pragmatic product and business innovations - things like The Machine, and all-flash at 3 cents/GB/mo. - are really where the game is still played. Those things were front and center at this Discover and show that, whatever else is going on in and around the company, HPE still "gets it."