This past April, I travelled to Sin City (for the first time in my life) to attend the Microsoft Management Summit (MMS). Being my first trip to Vegas I wasn’t quite sure what to expect and of course I was not let down by the pure extravagance of everything. People, food, entertainment, gambling…I swear this place was designed by a group of people with the worst forms of ADHD. The fortunate (or unfortunate, depending on how you look at it) part was that I was there for a tech conference, so my experience was a little less overwhelming. 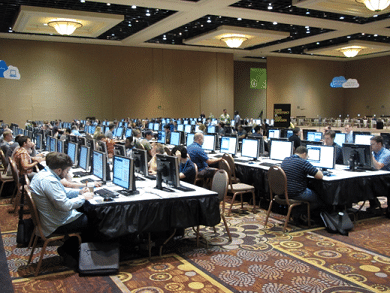 For those who attended MMS, I’m sure you’re familiar with arguably the coolest part of the event, the hands-on and instructor-led labs. You can sit down and test out a number of Microsoft management technologies in your very own virtualized environment at your own pace. The best part? Who cares if you break something, because you can just start over! The setup this year had 650 different lab stations and let me tell you, the seats were rarely empty. People were getting kicked out late at night because the event team needed to get some sleep. Each lab consisted of numerous VMs with specific amounts of memory, processing power, storage, and network resources. For example, even the fairly simple Service Delivery and Automation Lab used four VMs, 15GB of RAM, 15 virtual processors, 280GB of storage, and two virtual networks.

So you’re probably thinking “Wow! That must be incredibly demanding on the infrastructure. What was all of this run on?” If you glanced over to the enclosed display of blinking lights and awesomeness just next to all these lab stations you would have seen the Serverquarium. This honking collection of HP hardware and MSFT software was truly Vegas-esque in style: extravagant, eye-catching, and drop dead sexy. But equally cool was the small footprint. We were fortunate enough to get a behind the scenes tour of this incredible system by Xtreme Consulting, the team that built the system, as well as some people from HP and MSFT. 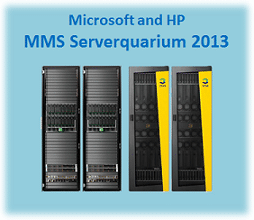 What did it include? HP ProLiant servers and HP 3PAR StoreServ storage that delivered a 100% virtualized infrastructure, along with integrated HP and Microsoft management applications. It used the latest technologies from both vendors, including Windows Server 2012 with Hyper-V, System Center 2012 SP1, and the HP VirtualSystem VS3 for Microsoft (which has just been replaced by the new HP Converged System 700x engineered for Microsoft, which delivers the same capabilities).

What kind of performance was seen? Just mind-boggling numbers really: 3,500 VMs running simultaneously, 4,000 VMs per hour, 544 CPU cores with peak utilization at around 30%, and a total of 48,950 VMs created and destroyed in just 4.5 days. The system was capable of delivering up to 8 million IOPS and 32 GB/s of throughput! And the crazy part? Nothing broke. There wasn’t even a hiccup. Every person got top notch performance throughout their entire experience. They could sit down at a workstation, start a lab, and in a few seconds the Serverquarium gave them all the resources they needed.

So we’re a little late to the party in talking about MMS, but we were working on a paper to highlight one of the most important things about it: The Serverquarium. Check it out — along with the video summary — for more details!