At .NEXT Nutanix Adds App & System Visibility to its Infrastructure-invisibility Foundations (video) 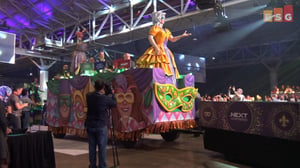 Intriguingly located just down the New Orleans Convention Center hallways from a cannabis-growers conference that was also called ‘Next,’ Nutanix just held its user and partner event. What were the folks at the Nutanix .NEXT event ‘smoking!?' This year it was a heady mixture of (to borrow the company’s theme) “freedoms” – not just in terms of infrastructure and on-premises IT, but also in terms of a hybrid multi-cloud world…and even personal progress.

The underlying enabling-twist to a lot of this was Nutanix adding significant amounts of visibility – whether into such things as application performance or optimum placement of workloads across clouds, compliance, and network traffic – to its original, and continuing, mantra of invisible infrastructure.

My colleagues Bob Laliberte and Mike Leone join me in the following ESG On Location video to encapsulate some of the key news and insights we garnered.

Clearly there’s a real breadth of compelling capabilities here – everything from the almost mundane addition of object and Kubernetes support; through the crucial, expanding ability to optimize cloud costs; and on to the engaging idea of using Era to make the moves that Beam discovers to be recommended.

“One-click” remains a Nutanix calling-card….its user community clearly loves this, and so Nutanix needs to exercise a degree of caution that it does not forget what got it to where it is, as it continues its march from A to Xi (pun intended). After all, freedom is a very attractive thing - and as long as the Nutanix users feel they continue to gain sufficient – and expanding - IT freedoms by willingly being in the Nutanix enclave, then the company has plenty of room to grow.

For additional insight, please see these blogs from Mike Leone and Bob Laliberte.