At .NEXT, Nutanix Says It’s Time For a 'Real Hybrid Cloud' (Video) 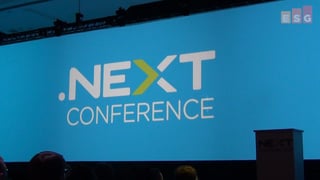 Nutanix held its user conference - .NEXT – last week in Washington D.C. If it felt a bit cult-like that was only in the good sense, as befits an organization with NPS scores over 90% for three years running (that is ethereal territory).

As many other vendors are running hard, hoping to catch Nutanix and steal/borrow its “HCI cloak,” so it is running just as fast to try to ensure that spot is vacant by the time any others get there. It spent the conference explaining and promoting the malleability and expansion of its “Enterprise Cloud” approach.

Some key takeaways from, and comments about, the event can be found in the ESG On Location video that my colleagues Terri McClure, Brian Garrett, and I shot while there.

As the video explains, Nutanix spent a great deal of time talking - appropriately, given the name of its conference! - about what’s next. The case for HCI has been made; now the question is what HCI should, can, and will become. The answer from Nutanix is – aside from the razzmatazz and specific announcements in DC - resoundingly crisp and simple: its vision and guiding-mantra of “one OS, one click” for any application, any place, any deployment style, any consumption choice, pretty much any compute platform, essentially any whatever, is at once both beguiling, attractive, really hard to do, and yet full of value for both Nutanix and IT users when delivered. Adding the likes of Cisco and HPE support (which exemplify its “software-first” model) into its Enterprise Cloud - joining AWS, Azure, Lenovo and Dell - was capped off by Nutanix announcing its new relationship with Google Cloud Platform (GCP).

Nutanix talked of itself delivering “real” hybrid cloud/IT. Obviously there are stages to this: its “Xi” will debut for DR and migration on top of GCP….but the route to an increasingly genuine delivery of “utility IT” (my, how long we’ve heard that promised, eh…!?) is clear, aided significantly by its Calm “workload placement recommendation engine.” Assuming Nutanix Xi can deliver on its intent to have the same tools, processes, and experience everywhere, then of course “real hybrid IT” actually and eventually becomes “just IT,” with by-then-invisible hybrid elements subsumed into what’s" just normal."

If there’s a bottom line from .NEXT, perhaps this is it – whereas Nutanix was founded to build a great “data plane,” it is now focused heavily on adding a great “control plane.” CEO Dheeraj Pandey made it straightforwardly clear that – like any successful modern company – it must change or die. In simple terms, Nutanix is moving from being a better IT nuts and bolts company, to try to be a provider of a better IT delivery environment, period. As I commented in the video, Nutanix is certainly not claiming that it is the only vendor that has spotted this need and opportunity; it is instead basing its optimism – and future - on its ability to execute faster, more simply, and more comprehensively than its competitors. While many vendors might claim the same thing, Nutanix’s optimism is bolstered by its existing platform, market traction, and raving fans. That’s a real hybrid set of positives for what comes next.