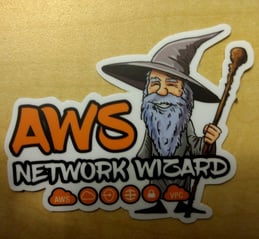 I attended a session at AWS re:Invent titled “Planning for your advanced AWS networking architectures” that was held by Matt Lehwess and Nick Matthews, who were rightfully dressed as networking wizards.

Without going into the details of the presentation, I have a few “meta” comments:

It’s so easy to set up networking in a public clouds (you set up VPCs and elastic load balancers without the need to purchase and configure hardware) that we are tempted to experiment with different architectures to see what happens.

However, one needs to still plan appropriately. There are several issues that cannot be ignored.

What does this mean for practitioners? Follow good design patterns. It’s tempting to try to experiment endlessly, or try to force fit a design into your architecture, only to realize it’s brittle or not scalable. There are active forums, best practices published, and even real-live solution architects from AWS who can help customers. The challenge is that the world of cloud networking is evolving rapidly, so a best practice document published a year ago may have become out of date. But this should not discourage you. Changes are a sign of progress and many limitations are being overcome. Thus, it’s good to use a design pattern that can evolve into the future.