AWS Is Not Slowing Down at re:Invent (with Video) 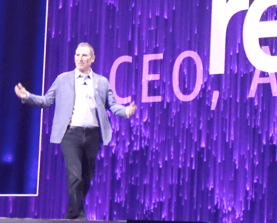 AWS, as an established public cloud leader, can afford to rest on its laurels, but with competitors sprinting behind it, it is not slowing down in any way. During the Global Partner Summit at the re:Invent trade show, there were numerous announcements, including the Networking Competency for AWS Partners and the availability of PrivateLink for customer and partner network services.

Are there any patterns I see?

The most obvious item is that AWS is relentless in releasing new capabilities. The term "re:Invent" references themselves as well as the directive posed to their customers. A more pragmatic view is that AWS continues to fill in some holes in its offerings as the ecosystem evolves. AWS has a history of releasing many services per year, and it is not slowing down.

Networking has been a relatively late comer in AWS ISV competencies after the maturity of services such as compute and storage (examples are EC2 and S3, respectively), but as we know (and as Google Cloud staff likes to say, and I paraphrase): "There is no cloud without networking." Of course, we already have networking items such as floating IP addresses, Direct Connect, etc. but they were useful for traditional workloads in VMs, and less so for composite SaaS applications that utilize services from many SaaS vendors. But ISVs are now offering app components that form that foundation, so why not support that?

AWS recognizes that and has created a competency program for its AWS Partner Network to offer a set of solutions, ranging from ISV partners such as Aviatrix for connectivity to Gigamon and IXIA for monitoring. Firms like Equinix have achieved Direct Connect Infrastructure Partner status.

This list is a good starting set and offers trustworthy building blocks to augment the built-in networking with third-party solutions. While many of these elements have long been available, seeing it elevated to a new status is very comforting to me, and I see that a major hole has been filled.

The list of features within AWS is growing, with PrivateLink offering a way for SaaS application developers to offer private endpoints without needing to expose data to the Internet. I won't repeat the details, but this is a confirmation and also a realization that AWS is becoming a platform upon which SaaS vendors build apps that rely on yet another set of SaaS services, which means that AWS is a platform on which various services are stitched together. The notion of AWS as a provider of isolated "plain old IaaS" VMs in EC2 is long past. It is evolving as a tight platform to mash services together, and those services as SaaS-based (think of Twilio), as opposed to libraries that are linked into the app itself.

While PrivateLink by itself is not an earth shattering release, it does remind us that AWS has become a rich ecosystem in its own right. That may be the key takeaway from this announcement. We've always known that there is an ecosystem, but having technical solutions support that directly makes it so easy for ISV SaaS providers to stitch pieces together.

Watch our recap video below, and catch up with all of ESG's coverage from AWS re:Invent on our site.