AWS re:Invent 2019 has come and gone. The event was full of announcements, people (the entire Las Vegas strip was taken over by 65,000), and fun. Many announcements were shared prior to the event, but in a 3-hour marathon keynote, AWS CEO Andy Jassy shared more…and more….and more. And he did it all without saying “multi-cloud” or “hybrid cloud,” the latter being most impressive since, well, Outposts. Focusing on analytics, databases, and AI, here are some of my key takeaways. 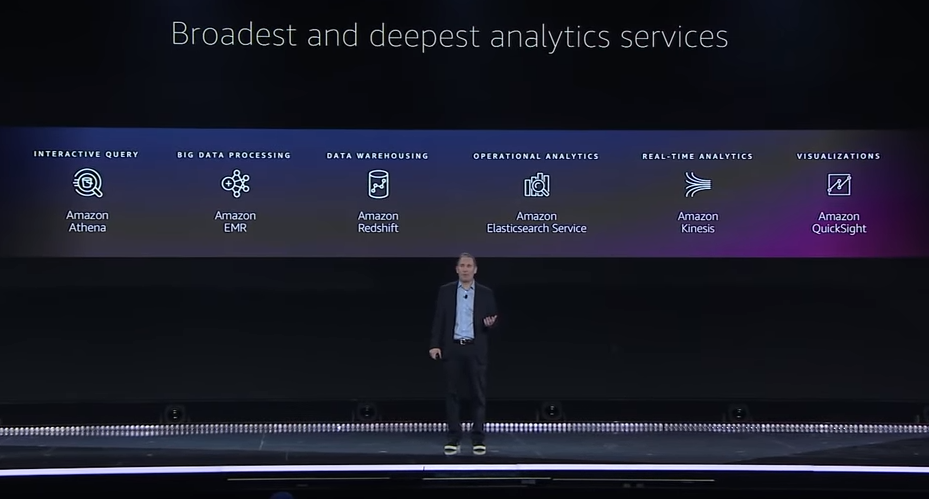 Based on end-user conversations, one of the potential drawbacks of AWS analytics services has been around performance and how platforms like RedShift deliver throughput/latency and handle concurrency. It’s not that the services weren’t performant, but handling the scale of where many organizations want to go was a perceived challenge for AWS. Combine that with some recent digs from Microsoft at Ignite just a month ago, and I was expecting a good response from AWS. I was not disappointed. Performance was front and center across much of the analytics announcements.

There is a heavy focus on performance so far in the @awscloud keynote. RedShift RA3 Instances to independently scale compute and storage. AQUA for query acceleration, and UltraWarm for an even faster tier of Elasticsearch storage. #reInvent

Additionally, AWS launched two new features to help improve the integration and management of data warehouses and data lakes. Data Lake Export will be used to unload data from a Redshift cluster to S3 in Apache Parquet, and Federated Query will enable end-users to query data from RedShift across data stored in RedShift, an S3 data lake, and in other AWS database services.

The one area I was expecting to hear something about was visualization and QuickSight. With Salesforce acquiring Tableau, Google acquiring Looker, and Microsoft continuing their dominance with PowerBI, I was expecting some kind of response here, but we didn’t get anything. With that in mind, I think this will be the first area we hear updates on in the new year.

Jassy talked about AWS offering the most complete collection of purpose-built databases. Aurora, AWS’s MySQL and PostgreSQL-compatible relational database, remains the fastest growing AWS service to date. But the big announcement in this space was the Apache Cassandra managed service. It’s interesting because AWS already has a well adopted offering that competes in DynamoDB. This one will be interesting to follow over the next couple years because it remains to be seen how invested AWS is in the open source project or if they’re looking at this new offering to serve as somewhat of a gateway to Dynamo.

@awscloud SageMaker has added 50+ capabilities over the last year, between Ground Truth, Marketplace, SageMaker RL, Spot, and Neo. Tons of innovation that is being driven by the rapid adoption of the technology and feedback from customers. #reInvent

On stage, Jassy announced more updates to SageMaker, which I believe is the most important of all their AI services. They're continuing to invest in ways to simplify not just how to get started and use the service itself, but the on-ramp for both developers and data scientists. SageMaker Studio brings an integrated IDE to the stack, which is a huge deal since ESG research shows the area of the infrastructure stack that is believed to be the weakest link in an organization's ability to deliver an effective AI/ML environment is an integrated IDE. Additionally they announced:

In total, there were over 70 announcements across all of AWS. And while these are still a lot to digest, one thing stuck out to me above all else: AWS is not resting on its laurels of being the cloud leader.