In my role covering big data at ESG, nothing would please me more than to say I am covering the hottest area of IT. And perhaps from a hype perspective, big data is hot, but from an IT spending perspective, while decidedly warm, big data is not nearly number one. In ESG’s just published 2013 IT Spending Intentions Survey, which suggests around a 2% overall increase in IT spending (the mean came in at 1.99% for those of you who are statistically significant), the closest proxy to “big data,” specifically “improved data analytics…,” tied for 5th place, among a longish list of “Business Initiatives with the Greatest Impact on IT Spending Decisions.” Note that if one only focuses on IT priorities not tied to business initiatives per se, BI/ analytics ties for 9th place.

2013 Initiatives with the Greatest Impact on IT Spending Decisions 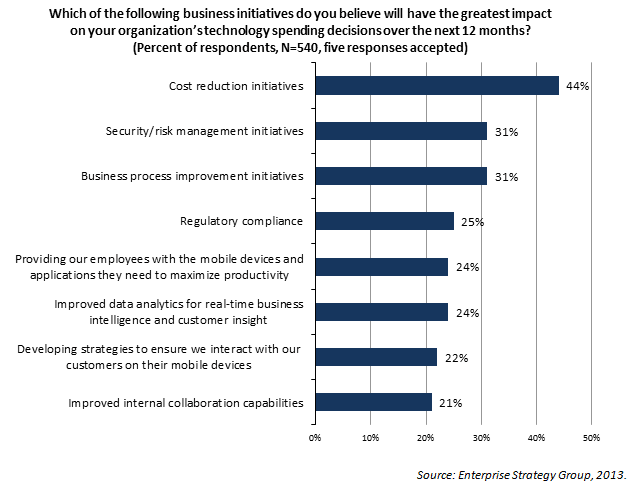 T5, with 24% of the 540 respondents citing “improved data analytics…” as one of their top ten business priorities impacting IT, isn’t bad. It actually maps well to our mid-2012 survey that showed about 40% of respondents – those with a more distinct focus on data management and analytics BTW – citing it as a top 5 priority. Suffice it to say that a healthy minority have been bitten by the big data bug, but not deeply enough to push large amounts of difficult to reallocate IT budgets into the analytics bug juice cup.

How boring, but cost reduction initiatives, business process improvements, security and compliance stand ahead of data analytics, which tied with mobile computing. What happened to big data, isn’t it the IT initiative that will forever alter the competitive landscape of business and government? Here are the three primary reasons why budgetary reality flies in the face of big data hype:

I am not saying that the big hype of big data of 2012 will entirely be squashed during 2013. In fact, improved data analytics made the biggest jump between 2012 and 2013 in terms of business initiatives impacting IT spending. In addition, business intelligence/data analytics is most commonly cited as the workload most responsible for storage capacity growth, and ESG definitely sees lines of business and marketing taking on more share – albeit incrementally only - of the budgetary load for IT initiatives. Given all of that, 2013 will be an excellent year for big data. But crazy claims like big data will augment the IT workforce by 25% over the next two years, or that big data will grow from a $5b to $50b in 5 years, and other wacky market sizing and forecast exercises need zapping. Thankfully, ESG’s IT spending survey for 2013 helps take the inaccurate creep out of big data forecasts, but also clarifies that big data will do more than merely crawl along.