A lot of their success is summed up in the graphic below, which shows progress from 2004 and continuing into the future. I’ll stick to the highlights : EMC saved $66M in OPEX and $157M in CAPEX, reduced CO2 emissions by 100M lbs, and has increased both productivity and agility.

Don’t miss this gem also: While storage capacity went from 1PB to 13PB, note that they actually reduced the number of data centers. How did that happen? Going from 15% virtualized to 92% had a lot to do with it.

Virtualization, Consolidation, and Automation were the keys. They enabled EMC to shrink IT spending for “keeping the lights on,” and redirect more of the budget to innovation. For EMC, growing revenue made that even better—but the point is, anyone can do this, not just industry giants. If your revenue line is flat or declining, all the more reason to leverage modern technology tools to free up IT budget to use as you need. 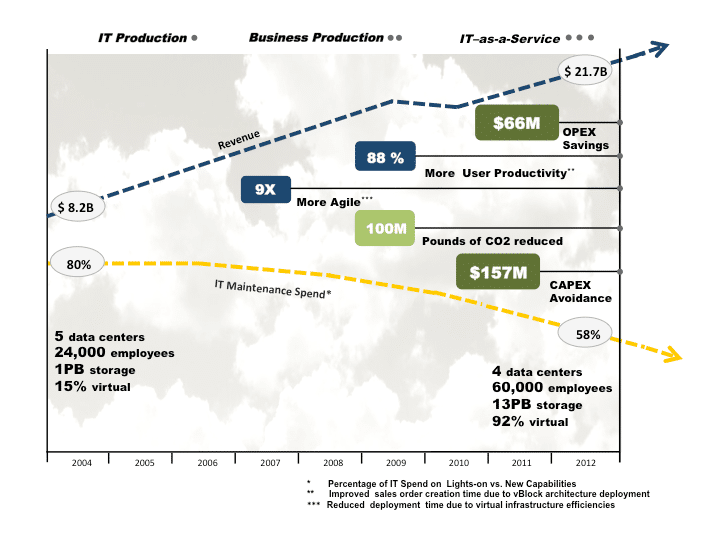 Today, EMC’s focus is on providing IT as a service—which means some shifting of focus to people and processes, rather than just technology. EMC IT is acting as a business partner to its internal customers now—which changes the relationship significantly.

There is much more in the full report about how EMC accomplished all this, plus some really cool details, like how EMC is:

You can find the full report on the ESG website.