Can Augmented Reality Bridge the Digital & Physical? PTC Thinks So 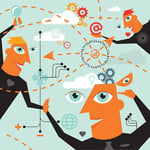 I had the opportunity to attend PTC’s ThingEvent in Boston last week, touted as the event that would allow us to “See Things in a New Way”. The event, held on January 28th at the Revere Hotel, was an intimate but well-produced extravaganza of live-streaming and live-demos.

The spotlight of the afternoon was on how PTC’s newly acquired Vuforia platform will be used to integrate augmented reality (AR) into broader IoT initiatives. We’ll be publishing a more in-depth brief on the announcements and implications, but here’s quick synopsis of the highlights:

While AR was the centerpiece of the demos and announcements, what was most interesting to me was that the customer demos PTC showed: a convergence of disruptive technology coming together under the umbrella of IoT: sensors, smartphones and tablets, wearables such as heads-up displays, big data, mobile applications and contextual computing. The event featured some impressive proof-of-concepts (POCs) from motorcycle manufacturer KTM and Schneider Electric which really emphasized that IoT is not just about connecting physical objects, but bridging the digital and physical environments. And often, the bridge between those worlds are people – field workers, technicians, equipment operators – whose jobs can be made safer, easier, and more productive through the use of data and information from their surroundings.

PTC Pulling its IoT Assets Together

The event also served as a means for PTC to articulate how it’s active acquisition strategy in the IoT space over the past two years is coming together. Vuforia is only the most recent addition that includes Axeda (2014) and Kepware (2016) for IoT connectivity; ThingWorx (2014) for app development; and ColdLight (2015) for predictive analytics. Perhaps more intriguing was the company teasing something it’s calling the Thing X Project, to be formally unveiled in the summer of 2016. Thing X will have three components: ThingBrowser which will act as a universal app to recognize smart things; ThingServer, which will publish content to the browser and is analogous to a web server; and ThingBuilder which will be a studio to connect and visual data with physical devices, or “digital twins.” And in the spirit of creating a process for creating AR experiences that is analogous to the web, PTC created TML – or “thing markup language.” Although the details revealed were brief, they hint at PTC’s ambition to spearhead a new way to create and consume AR-driven apps. PTC is certainly positioning itself as an aggressive and ambitious player in IoT with these moves.

Augmented Reality as an Interactive Medium for IoT

AR certainly isn’t completely new phenomenon, but its use within enterprise and industrial environments is still very nascent. The power of AR for businesses is that it can act as a conduit between the digital and physical world. And the combination with IoT shifts AR from merely being an overlay to existing experiences toward an interactive medium with the world of physical objects. For enterprises, this means they need to recognize IoT as part of a broader digital transformation strategy for organizations, with integration among various digital technologies.