Can Cisco's Intercloud Offering Deliver On Fast IT?

Aesop, an ancient Greek storyteller, is credited with coining the expression, “slow but steady wins the race”.  That ancient wisdom rings hollow in the present-day digital age, where the need for speed is essential to business survival.

In my video recap of Cisco Live, I spoke about how outgoing CEO John Chambers implored the 25,000 in attendance to seize on the notion of "Fast IT". Businesses have to be able to move quickly to seize on new market opportunities, lest they be outflanked by a more nimble competitor.

“Disrupt or be disrupted," was how Chambers put it. He went on to provide several high profile examples of innovative technology driven companies that have disrupted their respective industries, from Uber and Amazon to Apple and Airbnb. No business, no matter how firmly entrenched, is immune to the disruptive forces borne out of the digitization of data and the democratization of IT.

Many businesses are looking toward OpenStack as a hybrid cloud computing framework to enable rapid application development and to create application workload elasticity on-premises and across public cloud environments. But one of the challenges is that an OpenStack implementation often may take many months before these capabilities can be realized. 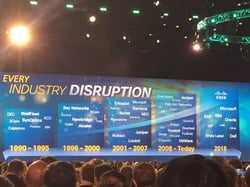 This protracted deployment timeframe flies in the face of Chambers’ admonition that businesses can no longer afford to move slowly. This might explain why Cisco acquired Metacloud, an on-premises, OpenStack-as-a-Service solution provider.

Rather than have to endure a multi-month OpenStack deployment, Metacloud users essentially roll in a pre-configured OpenStack rack that can start provisioning private and hybrid cloud resources that same day. Likewise, Cisco’s Intercloud provides a cloud marketplace with an extensive ecosystem of applications and services that allow users to quickly provision and stand-up hybrid cloud application workloads for test/dev and production instances.

The Intercloud can also be used across any cloud services provider - from Cisco data centers to AWS, Azure, Google or any number of regional service providers. This gives businesses the depth and breadth they need to maintain cost competitiveness and flexibility across all of their application workloads. For example, if a business wants to run Microsoft’s Azure stack on-premises in their private cloud or in an Azure data center facility, they can use the Intercloud service to manage and orchestrate the movement of those workloads.

Cisco has been criticized in some corners for being too late to the game from a cloud provider perspective. While there is some truth to this, we're also still in the very early innings of the game. If nothing else, Cisco has learned how to survive multiple challenges over the last couple of decades from a bevy of competitors.

Their well-seasoned and well-honed survival instincts will serve them well as they help chart their customer's (and their own) course, towards the Fast IT promised land.