Cisco's Plan to Build the Internet for the Future

Last week, I attended Cisco’s #InternetForTheFuture event in San Francisco. This was a major announcement for Cisco and marked their entry into selling merchant silicon and optics developed by Cisco. Specifically, it announced Silicon One, the 8000 series portfolio with IOS XR7 and a line of optics solutions

To put it in context, Cisco has acquired a number of companies over several years in this space and it stated that this announcement represents over 5 years of R&D time and about $1 Billion invested to create Silicon One, which has some game changing capabilities.

Why is it doing this? According to Cisco, by 2023 there will be 49 billion connected devices, 4.8 billion users, and the average person will have 3.6 internet-connected devices on their body! All these devices will require greater internet capacity, and Cisco believes it is their job is to make sure the internet can handle the increased load.

So what is different about the Silicon that Cisco announced, the Q100? Well for starters, instead of building specialized silicon for a specific area, Silicon One represents a single silicon architecture that will span across the access, aggregation, edge, core, and msdc. This programmable, single unified architecture will make it much more efficient for organizations to program to and operate. It delivers much higher levels of capacity and yet, consumes far less power. The example I was given stated that, with current technology, to get 10Tbps required 42 RUs and 10 kwatts of power. Leveraging Silicon One, 10Tbps only requires 1 RU and less than 500 watts of power. This kind of transformative technology could be really impactful for cloud service providers and telcos, as capacity continues to grow unchecked but revenues remain flat (telcos). If these numbers are accurate, this is a game changing technology – the benefits remind me of the early days of virtual machine consolidation.

As I mentioned, Cisco also launched a new system, leveraging the new Silicon. Cisco will also offer the 8000 series portfolio, several of which they stated are already in field trials. Again, given the comparison above, this could be significant for telcos rolling out 5G that have to handle significantly increased capacity, and could allow them to utilize fewer devices, requiring less space, power, and cooling, and thus lower operating costs. To coincide with the new platform, Cisco also rolled out Cisco IOS XR7 that is also more efficient, requiring 50% less memory footprint, 40% smaller image sizes, 50% faster boot times, and 40% faster download speeds. Again, the theme is that it is more efficient and easier to operate. Cisco claims improved OpEx, TCO, and operational efficiencies.

To provide industry validation of Cisco’s strategy, Cisco hosted an impressive panel of guests including Microsoft, Facebook, AT&T, and Comcast, that all seemed to support Cisco’s approach, with many saying they were happy to see a new entrant for merchant silicon. Others said they want to leverage the silicon in a white box approach and that simplicity was a key ingredient for them. Facebook specifically applauded Cisco’s ability to take on the big problems and dedicate the time, money, and resources to develop and bring to market this new technology.

Cisco also spent time reviewing their optics strategy as well – with the big news being that Cisco pluggable form factors will be offered on non-Cisco solutions, including white boxes and competitive products.

Cisco is also being flexible with how organizations can consume all this new technology. At the announcement, they stated that “Cisco will deliver innovation any way our customers want to consume it.” This gives those service providers the choice to consume the technology as a system (the 8000 series), or as silicon (Q100) in a white box, as well as any of their optics solutions.

Cisco employees present for the launch believe this is one of those events that they will look back on and say, “I was there.” Clearly there has been a lot of work done to get them to this point and a lot more that has to be done before a moment of reflection like that can happen. Cisco is keenly aware that they missed the first inflection point into the cloud providers (that Arista and Juniper have taken advantage of) and is determined to make the most of this opportunity. If the new technology works as advertised (it is already in the field) and Cisco provides the flexibility to consume the technology in various form factors, it appears the market (based on the vendor panel in attendance anyway) is ready for another entrant to drive the next generation of technology and accompanying benefits to the cloud providers and telcos. 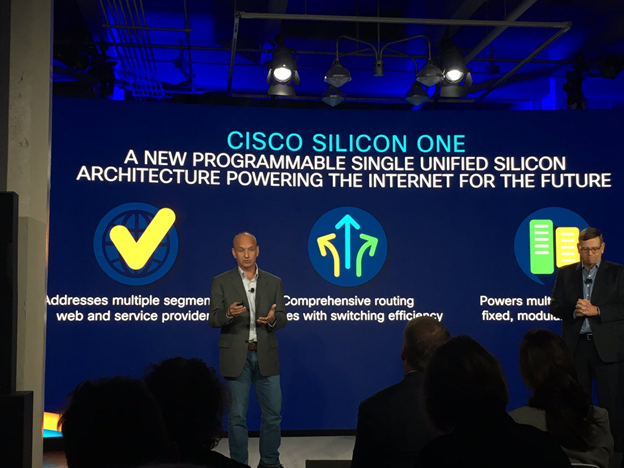