We've seen it before: Technology innovator and champion rides partnership development to unshakeable position in rapidly growing IT market. Sun did it with Java, which augmented their market leader status and sales in the late 1990s (fumbled in the 2000s, alas). Red Hat did it with Linux. Cloudera pursues a similar partnering power path in the Hadoop corner of big data. Consider this partial list of Cloudera’s partnering activities thus far in calendar 2012:

We have five months left in 2012, and Cloudera stands out as a or the Hadoop distribution of choice through HP, IBM, Oracle and Dell. Here is a nearly comprehensive primary technology provider list of Cloudera partnerships, which spans, for example, VMware to Microstrategy, Teradata to Intel, Cisco to Informatica. Are all of these partnerships highly active, where either there is a shared deep technology exchange or a shared go-to-market march? Undoubtedly there are a few Barneys, but certainly not all. 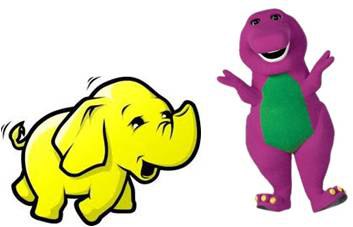 Who is missing? On the big data-as-a-Service or Hadoop-as-a-Service (HaaS) side of things, Amazon, Google, and Microsoft have gone their own way, no Cloudera partnership per se. In the analytics space SAS and Cloudera seem like natural partners-in-waiting. While VMware and Greenplum have struck partnerships with Cloudera, the hardware side of EMC has not done so explicitly, even though you can find Cloudera on Isilon implementations.

Which of these missing partner pieces seem important? It strikes me that Cloudera understands that the practitioners drive adoption more so than the infrastructure, so SAS and Microsoft would be obvious positive partnerships - in that order. Microsoft would seem the tougher of the two from whom to elicit a hug, given Microsoft's platform vendor status. Even though Microsoft continues to ramp its Hadoop support, mainly through Azure and partnerships, it sure would be fun to see Steve Ballmer snuggling with a stuffed Hadoop.

How about Cloudera and cloud providers? In ESG’s recent survey of 399 big data practitioners we found 17% interested in cloud implementations, though it wasn’t clear if those were part of hybrid implementations, pilots, proofs-of-concept or singular Cloud HaaS. Right now, Amazon Elastic Map Reduce (EMR) can probably point to the largest number of successful HaaS projects. Can Cloudera continue in its role as the crossroads between the leading enterprise IT vendors and Hadoop enthusiasts without a strong cloud front? While Cloudera has been deployed via Amazon AMI, Amazon EMR will likely continue as a preferred HaaS choice for the near-term. However, for at least the next year or two, ESG believes more enterprises will opt for on-premises appliance over cloud--concerns with security, governance, and information management will trump the cloud’s convenience. Thus, IBM, Dell, Oracle, HP, Hitachi, and Fujistu should yield the strongest channel for Hadoop and Cloudera.

MapR and HortonWorks are in fast partnering pursuit of Cloudera, and both are doing so admirably. But at the moment Cloudera owns the lead towards reaching something akin to the premier Hadoop platform provider. Call it a healthy lead in lap two of a five lap race, but Cloudera still has plenty of racing to do, such as cementing a few more key partnerships including a more direct play in the cloud. Given the Hadoop-centric commitment by Cloudera and the strength of its R&D team, look for Cloudera to (1) produce an answer to the weak real-time analytics nature of Hadoop, (2) continue to ship more management and security features into CDH, and (3) integrate more deeply with existing data center management solutions.

Cloudera’s marquee partnerships with the systems vendors underscores Hadoop's nearing standards status for big data in the enterprise. In ESG's survey, over half of the respondents said that they were very or somewhat interested in using Hadoop, though only 9% had already used it and/or were playing with it now. Cloudera and the other Hadoop distributors are helping Hadoop crossover from the early adopters to the early majority, almost exactly as you are reading this statement. It seems clear Cloudera understands how to reach this next tranche of customers. In order for Cloudera to maintain its advantage it will need to cement a few more key partnerships, execute with its key partners, and keep its R&D rhythm going, preferably at a blistering beat.