Dell's acquisition of EMC: the effects on networking 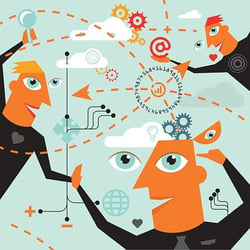 On October 12, Dell and EMC announced they have signed a definitive agreement under which Dell, together with its owners, will acquire EMC Corporation, while maintaining VMware as a publicly-traded company.

Here's the situation as it currently stands:

As I discussed in my brief, Dell Networking - A Matter of Choice, Dell has a tradition of providing choice in the software on its platforms. EMC does not have networking hardware products, although It does have infrasructure management software products in the Smarts line of products.

VMware has NSX network virtualization, and they've partnered with a variety of companies that provide network infrastructure (including Dell), and VMware doesn't recommend any particular hardware vendor. Other partners in the physical-to-virtual data center services category include Arista, Brocade, Cumulus Networks, HP and Juniper.

In the short-term, I believe that for networking, VMware and Dell will continue their partnership with multiple vendors. In other words, I do not think that VMware NSX will suddenly favor using Dell Networking as the underlay for its overlay network, and I do not think that Dell Networking will suddenly favor using NSX in its set of open networking partners. For the underlay (the physical network), Dell does support disaggregation for networking via Big Switch Networks Switch Light OS and Cumulus Linux, but also realizes that its customers who want an integrated solution can continue to run Dell Networking OS 9.

Although Dell has modern data center and campus networking switches in its portfolio, it does not have the breadth of networking offerings. As a result, Dell will still need to rely on partners to build out a complete offering. In particular, if Dell targets cloud service providers (which VMware also targets) as a customer base, it will need to integrate the use of powerful service provider routers, such as Brocade MLX, Cisco ASR series or Juniper MX series, to name just a few.

VMware thrived even after being acquired by EMC by being open to supporting a variety of partners, including storage companies other than EMC (such as HDS, IBM, and NetApp). It makes sense to continue with that formula. However, the situation is slightly different now. At the time of the VMware acquisition, EMC was primarily a storage company, so EMC chose to leave VMware alone due to the lack of overlap and as a strategic decision.

Dell comes from the world of x86 servers, which is precisely the industry that drove VMware's growth in server consolidation, so there may be more sharing of ideas and opinions. But there's no question that Dell is primarily a hardware company (with some software and services), but VMware is at its core a software company. That is a big differenece that cannot be ignored. One company has a DNA based on selling large volumes of SKUs where margins are scrutinized, the other sells malleable high-margin software supported by deep engineering. There needs to be lots of cross-pollination and learning from each other.

Where Dell, EMC (and VMware) can learn from each other

There is an issue of corporate DNA match between Dell and EMC (and VMware) and we can only speculate on how they will align. Dell has for many years been well-known as a nimble company that sold directly and benefited from optimizing its supply chain, but they're in the midst of tranforming themselves into an enterprise company (it does have data protection, security and information management solutions).

EMC, of course, is well-known as an enterprise IT firm that fostered deep relationships; it's only recently that it has moved down to small- and medium-sized customers. In this acquisition, Dell can learn from EMC, and also leverage its vaunted sales and consulting groups to work more closely with customers. VMware relies heavily on the channel for sales, but also has its own sales force, which may continue to sell indepenently. VMware can learn from having some hardware in its DNA -- either from the Dell Networking group or other parts of Dell.

Drawing too many analogies from another Texas based PC company purchasing a New England enterprise IT firm (Compaq buying DEC in 1998) is probably not appropriate, since it was a different time and industry dynamics differ, but those with long memories can recall what worked and what didn't.

Existing foundation for VMware and Dell networking and ICP collaboration

There are areas where  Dell and VMware have already partnered, so I naturally see seeds for closer collaboration and integration. Reference architectures for Dell and NSX as well already exist, as a converged infrastructure solution (integrated computing platform, or ICP) that incorporates NSX, or as an integration solution for a Layer 2 gateway between NSX overlay networks through Dell's switches. These will continue and will likely be expanded, step-by-step.

Questions to be answered

People will naturally ask what the effect will be of networking within VCE, which uses Cisco components. And there is a brand of re-badged SAN switches sold under the Connectrix name. For these questions, I'm eager to see what will transpire, but don't expect anything to happen overnight.