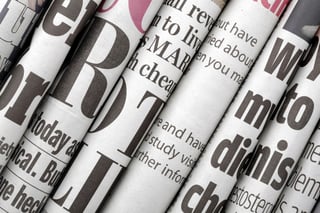 So, first let's get the deep breaths out of the way! It's funny how us humans behave - we pretty much have all known for ages that something would happen (or, that is, that something had to happen) with EMC, but when "something" actually does happen it is still surprising. I guess it is the timing and nature rather than the fact of the action itself that causes the surprise.

Anyhow, now we know what the “something” is....or at least will most likely be. I say that because, of course, it ain't a done deal yet. I still remember a few years back getting together to congratulate the 3PAR folks on being acquired by Dell....until, of course, they weren't! Now, yes, this is a totally different scale and different times. Coming up with someone else with a few (extra) tens of billions of dollars on their corporate Amex card credit limit - plus the logic and need to acquire EMC - doesn't generate a very long list. So one would imagine this deal will probably go through. But it didn't actually happen today, so anyone looking for a whole bunch of specifics is going to have to make do with a lot of speculation for a while yet.

What do we know? Well, this would be the largest tech acquisition ever....and by a long way. Once it goes through there's going to be enormous focus on such things as the suitability or otherwise of the cultures, channels, and portfolios of these two behemoths. In the meantime, we don't know a whole lot else.....although I have seen some fabulous puns and jokes already today (my favorites are that the new company could be called “Run DMC,” that EMC is “going to Dell in a hand-basket,” and that if this doesn't work out then Michael Dell can always run for president!).

You will read and hear a whole bunch about this over the coming days and weeks. As a tech industry news item they don't come any bigger. But like any few-facts/speculation-driven stories, the specificity of claims and expectations will soon drive you nuts. This deal, whether or not it goes through as-is, comes down to a few simple things:

Yes, this is huge news.....whether or not the deal is consummated. It is a clear manifestation of the tectonic (or paradigm....pick your preferred grandiose word!) shifts underway in IT. But - frankly – there are also enormous swathes of the population - even many in some parts of IT – that will barely notice or immediately care as they simply want "stuff" that ensures their "stuff" gets done - affordable and reliably.

While today’s news seems final, it is merely dramatic so far, and probably will only be seen as a prologue when the history of this period of IT is written.