Do you still need a VM-specific backup solution? 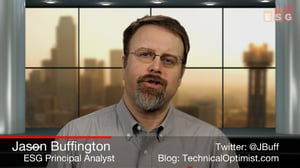 Probably not … but not for the reasons that you think. As most folks are getting ready for VMworld next week, ESG has published a brief, Is a VM-specific Approach to Backup & Recovery Still Necessary in 2017?

The real answer comes in a few parts:

The need for VM-specific tools had been predicated on legacy backup utilities struggling to back up VMs, which has mostly been mitigated by advancements in VMware APIs for Data Protection (VADP) and Microsoft VSS support. To be fair, there is still differentiation in how well various backup tools protect VMs, but the fundamental question of “can you reliably get a backup of a VM” is mostly solved by VADP and VSS.

And while the “unified” solutions now boast better VM-capabilities, the predominant leader in VM-specific capabilities has since added physical- and cloud-service agents, thereby no longer being "VM-specific" themselves.

There is more to both sides of the discussion, which is covered in the video below and in the brief (which is available to ESG subscribers).


To be clear, not every backup solution is equitable around VADP and VSS, so some still lack that fundamental capability (which will continue to fuel VM-specific supplements to legacy tools for the foreseeable future).  But once you get past that, then a whole range of other differentiators become even more interesting:

So, as you walk through the halls of VMworld US and VMworld EU … listen not just to the claims around VMware protection/recovery alone, but also to how those data management (protection, recovery, preservation, and availability) capabilities will fit within a heterogeneous world. THAT is what I'll be looking for at this year's VMworld events, as well as a few other industry conferences this Fall.

And if you want to visit on the topic, ping me at @JBuff to share coffee or ideas.

As always, thanks for watching.

Hi, I'm Jason Buffington. I'm the principal analyst at ESG covering data protection. One of the most interesting areas of data protection innovation for the past 10 years has been around the reliable protection and the rapid recovery of VMs. When legacy heterogeneous folks started struggling with backing up VMs trying to do it the same way they did with backing up physical servers for the decade before, a new category of VM-specific startups emerged. Today most of the VM-specific startups have been sold for their IP and are now either part of a larger vendor's portfolio or the technologies have actually improved another VM product in data protection. At least one VM-specific solution remains, Veeam, whose name is still relatively synonymous with VM protection recovery for a good reason. Some of the heterogeneous solutions have invested heavily in their VM capabilities which were greatly accelerated by VMware's vStorage APIs for data protection and more robust VSS mechanisms from Microsoft, thereby leveling the playing field somewhat for minimum backup and restoration functionality.

With such flux, let's look at the question of whether organizations are using unified, meaning the same software for protecting on-prem physical and virtual machines, or a VM-specific solution in supplement to their otherwise unified solution and also find out what they'll do two years from now. In our most recent research, 58% of organizations use a unified approach while 42% use a VM-specific. As close as those numbers are, that isn't the whole story. Roughly half of organizations like what they're doing today and are going to stick with it moving forward. That includes 13% who use a VM solution and like it plus 36% who like their unified strategy and will continue with it. I should mention that this data refers to method not product, so one could switch from one unified solution to another or from one VM offering to another but they're staying with the approach.

On top of that, one in three organizations is planning on switching. That includes 14% that are unified but switching to VM-specific while 19% are using a VM-specific offering and they intend to switch to a unified solution. That's right, more folks anticipate switching from a VM approach to a unified one. It's actually the first time we've seen this net shift in the unified direction. That leaves us with 18% that are undecided - 10% of VM users today, 8% of unified users today - all of whom are open to either approach moving forward. I like those folks precisely because they haven't decided. Based on what they're doing today, they're looking at what's going to fit them best down the road.

ESG has asked variations of this question over the years, and in 2013 it was about a 3 to 1 mix of unified to VM-specific. In 2015 it was about a 2 to 1 mix. In 2016 it's even closer now at 58 to 42. When we ask those 2016 folks what does 2018 look like, we see unified holding steady going from 58 only down to 55, while there isn't as much commitment to the idea of VM-specific going from 42 down to 27 with 18% undecided. Even if the undecided split right down the middle, unified gets a gain for the first time since we started asking this question.

Now, before the marketeers get ahold of this and exclaim the doom of VM-specific technology, it's not that simple because the lines are getting really blurry. It used to be that we had the enterprise unified folks on one side. They sold predominantly through heterogeneity, the ability to scale to the largest of IT environments. Meanwhile there were smaller unified solutions sold on ease of use and ease of deployment and reliability versus those stodgy legacy solutions. All those vendors in some way had to compete with virtualization specific offerings that had supplemented or displaced the unified when it comes to virtualization hosts that required a newer approach. Today most of those VM tools have morphed over acquisitions, but let's just call Veeam still the one to beat in virtualization. It's not an endorsement, but every category has a perceived king of the hill.

Here's where things get messy. All the unified folks have been improving their VM capabilities, in part due to better plumbing provided by VMware VADP and Microsoft VSS and changing their licensing models to better align with virtualization and modernization. Meanwhile Veeam's added agents for physical servers for servers running in public cloud, so they really aren't a VM-specific offer anymore. Veeam will probably continue to be perceived by many for the future as best for VMs, but as they are evolving towards being a unified solution that's grounded in VM capabilities, which is different than other folks that are grounded in unified capabilities now offering improved VM support. That's an interesting nuance on both sides and ought to be great fodder for competitive differentiation in the marketplace moving forward. On top of that, Veeam is moving up market while many of the enterprise unified players are moving beyond backup towards copy data management, archiving, etc.

In other words there really won't be any VM-only solutions to ask this particular question around anymore. As the industry moves forward, we'll just hear more about the differentiation between what each unified vendor does well. Maybe it's broader heterogeneous support, more comprehensive data management capabilities, easier to use or acquire or deploy. Maybe it's cloud abilities or economics or better scale or specific workload optimization. You get the idea. Each vendor will claim that they can protect most or all of your environment while doing X best. Of course X matters most, so that's why you should buy them. Oh, and by the way, regardless of how you backup your VMs, only one in nine organizations solely rely on VM-based backups with the rest supplementing those with snapshots or replication mechanisms or both. Between the blurry lines and the combining of approaches, that's what keeps the data protection industry interesting.

My name is Jason Buffington for ESG. Thanks for watching.