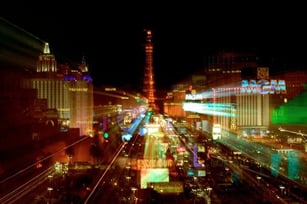 So, the one thing you can be sure of at an EMC World is razzmatazz; and this year did not disappoint with diversions: what with a jumping truck, rock bands, Mr Spock, off-stage "Beast" roars, pumping water (for good reason!), and a motorcycle multi-champion - to mention just a few - it could get easy to be washed along with the tide of geek-humanity from one bright light and loudspeaker to the next.

However, beneath the Vegas veneer, this was perhaps the most interesting EMC World for a long time. Gone was the self-competitive-product-announcement-chase, and instead we had a real focus on where a changing EMC can and will fit in a changing IT world. To try to get to the essence of what was covered (you can read the actual product announcements anywhere), here's our "ESG On Location" video, with a broad selection of my colleagues giving their take.

And so to the title of this blog post: it is deliberately ambiguous. On the one hand EMC was discussing, parading and - of course - trying to influence what the "new reality" of IT will be. And on the other hand, behind the showmanship, there was a "reality show" behind-the-scenes-honesty in much of EMC's [pretty open] discussion about its own role and need to change. Many ESG-ers have already posted specific blogs on their views of particular aspects of this (being biased to storage I particularly liked Scott Sinclair's blog on EMC World), but for once the big picture was more important than the details. And the entertainment was definitely secondary to the reality show.

Mark Peters: So just a few days ago in Vegas, it was the welterweight boxing that had everyone's attention, but now we got 10, 12,000 people here for EMC World 2015, the heavyweight of the storage industry. Now, EMC, the codename, the theme if you like, is "Redefine.Next," which you see all over the place. I want to be clear. Everything here is about transition, the market, the company, the products. Redefine.Next is not a static idea. I don't think we just redefine and we end up somewhere else. It's about the next level of redefinition. Let's hear from some of my colleagues on what they notice most at this EMC.

Tony Prigmore: So I think the big win for EMC customers today was the clear vision that the federation is unified. They're strengthening the connective tissue between the value of each element and member of the federation, and there's going to be a real opportunity over the next two to three years for customers to get better value easier, and as Joe Tucci described, with less friction. So that's the big takeaway, obviously, if you're an EMC client and want to leverage more of the portfolio. There is a partner element to that, and clearly, EMC sees the opportunity to partner with not their existing partners alone but also a new set of partners. And so the transformative aspects that they're bringing into their portfolio is only going to make it a bigger opportunity for most of the EMC customers of today that want to make that transformation with them, as well as the new set of partners that they plan on bringing into the fold.

Kevin Rhone: My big takeaway from EMC's Global Partners Summit of the last couple of days was EMC's new commitment to allowing partners to take full advantage of the federation of companies and sell across the Federation. It's going to take some hard work and behavior changes, both on EMC's part and on the partners' part as well, to sell complete solutions using all of their technologies and all of the products. There are a couple of things that need to happen to make this a reality. There needs to be a behavior change in EMC's field sales and their engagement and their processes, and also changes in their global partner programs to motivate those changes of behavior in the partners to sell business outcomes including all of the solutions.

Colm Keegan: One of the takeaways that I personally found interesting is the fact that EMC continues to do a great job of integrating their acquisitions. So let's take ScaleIO. ScaleIO was acquired by EMC two years ago, and at EMC World 2015, they announced that ScaleIO will be available as a solution from the VCE company as a technology called VxRack. Organizations now can deploy a VxRack alongside a Vblock on the high end or VSPEX Blue at the departmental level, and essentially, VxRack is going to be there for tier-two data center workloads, next-generation data center applications like big data, social media, web-scale-type applications.

The reason this is important is that EMC continues to message transformation, and part of that transformation theme involves the Federation, which is the EMC group of companies comprised of EMC, VMware, and Pivotal. As Joe Tucci alluded to, trying to smooth out the seams across these three organizations is very challenging, but he assures us that they've made significant progress. EMC has demonstrated this ability to integrate technology companies very effectively, add value to their customers, and show them that transformation is possible.

Terri McClure: Sometimes amidst all the smoke and lights and loud music at EMC World, it's hard to find where some of the real bits of news are coming from. And the theme here is powering the information generation, and that's really powered by this, the mobile device. So I keep an eye on things that affect mobility, and here, that means Syncplicity. So the news from Syncplicity this week is their integration with Outlook, and they're doing some really cool things with Outlook, allowing people to work the way they're used to with their e-mail systems by just clicking on an attachment and automatically sending a link, if it's too big a file for your e-mail system. They're doing some other really cool things, so what excites me here is the direction that Syncplicity continues to take to power the information generation and make me more productive on my mobile devices.

Mark Peters: So how do we summarize all this? There's a lot of change going on. Tucci, in his main address, talked about living in interesting times, and clearly that is these transitions of the company itself. Many times we heard phrases, you know, "Fill in the black at the end. This is not your father's VMAX." You now see EMC embracing or at least beginning to contemplate and begin to use open sourcing. We saw transitional products like the VxRack, which takes the best of, if you like, modern software definition with a traditional hardware puts the two together, so you've got transitional ways for users to embrace this new way of doing business. You hear phrases like, "Think globally, act locally." This was, "Think like an innovative startup, but act like a traditional enterprise vendor." That's what EMC is trying to do, and that's a delicate, interesting, compelling transition to watch over the next few years.