F5 Agility conference: somebody familiar, some things are new 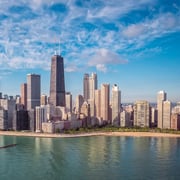 Visiting the F5 Agility conference in Chicago recently showed me that the company is adapting to major changes in the industry and evolving its product line to keep up with the changes.

There was an interesting combination of the familiar and new.

We saw the return of John McAdam as President and CEO. It was nice to see a familiar leader there, as he had previously been at F5’s helm, but he noted that they are identifying a permanent successor. Things may be different at the next Agility conference.

On the new side of the spectrum, there were indications of a barrage of new products announced for the new BIG-IP iSeries Platform. There are 3 BIG-IP products to release in Q4 16, and another 6 in Q1 17. This is a sweeping change, and it emphasized that F5 is keeping up with changes. It’s important to remember that F5 is a platform designed to deliver many services to applications and its BIG-IP iSeries in particular is tailored for applications deployed in private cloud, while other editions of BIG-IP virtual edition are starting to work in the public cloud with a “bring your own license” model.

What makes F5 a platform (not just its TMOS — the core operating system for BIG-IP) is that there is a unification of capabilities through F5 products as a platform, and that it can bridge the public or co-location cloud, along with the traditional private cloud.

The changes in application landscape drive F5 to examine the world differently. For example, in the State of Application Delivery 2016 presentation by Lori MacVittie, applications are moving to the cloud, and that means that application services need to follow to the cloud as well. However, this doesn’t necessarily mean that all applications will be cloud-based. On the contrary, as mentioned earlier, enterprises will use a combination of public cloud for SaaS and on-premises for enterprise apps. So enterprise will need a unified view, even if they are planning to shift ever more workloads to the cloud.

So the key thing to remember that firms like F5 has their future tied closely to applications, and application owners also realize their fortunes are tied to the networking infrastructure that delivers application.

F5’s actions will be closely aligned with how applications will be developed and deployed. I expect more things from them in areas such as tying micro-services into the workload portfolio, and that core ADC capabilities will be further opened up for DevOps engineers.