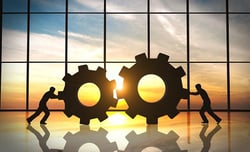 When I wrote about my expectations prior to Dell EMC World 2017, which you can read here, I expected this show to be a bit of an anomaly. With the show happening so soon after the one in Austin, I had lowered expectations on the number of new storage product announcements. I thought I would use the time to better investigate how the merger is progressing. I have not been shy to point out that prior to the merger, these two companies had dramatically different cultures. And I wanted to see if the two companies fit together like oil and water or like yin and yang. What I learned at Dell EMC World left me hopeful not only for the future of its storage portfolio, but the rest of its product offerings as well.

The theme of the show was digital transformation, and while a number of exciting thoughts came up during the conversations, I will save those for a later blog. I wanted to focus this discussion on how Dell EMC’s transformation to become one company is impacting its infrastructure innovation. Just as EMC has brought a higher level of enterprise credibility to Dell, Dell has delivered something just as valuable to EMC: its logistics and procurement capabilities. What does this have to do with storage you ask? Well, a lot, especially when it comes to flash storage.

For those of you who follow the space, flash components are being torn between two competing market forces. First, technology innovation is delivering superior quality and higher capacity components, helping to drive down the price of flash. Second, however, the demand for flash has risen to a point where supply is becoming an issue, which can have the opposite impact. The net impact of these forces is that companies that ship larger volumes of flash should be able get better access to this limited supply and more effectively deliver the cost savings of flash components to the customer.

And, the DellEMC flash storage announcements reveal that the combined company is having continued success in that regard. As a result, the combined enterprise looks like a stronger and more competitive player in the marketplace. Some examples include:

On the former Dell side, the merger seems to be having similar beneficial impacts. For example, Dell EMC recently announced its 14G server line. And while I am sure the development was started prior to the merger, there must be something in the water at Dell EMC because the customers I spoke with at Dell EMC World raved about this latest generation of servers, way more than people typically talk about what some still refer to as “commodity” Intel-based hardware. 14G may have been quietly the star of the show. Heck, even the XPS laptops look good. In other words, I went into Dell EMC World looking for the signs of slowing down due to the complexity of integrating two massive behemoths, and what I found was an invigorated workforce excited about the future. This is just the first Vegas-based Dell EMC World of many, but so far Dell EMC is off to a strong start.