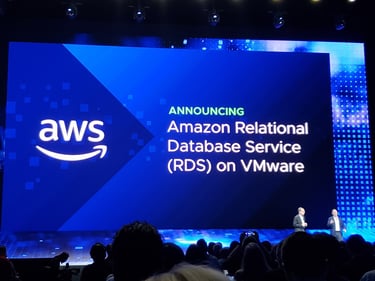 As I've written before, I've been a long time attendee to VMworld (if you count EMEA events separately, this is my 15th VMworld). I have to say that the VMworld 2018 Day 1 Keynote potentially had the biggest impact on the industry I have ever seen from the show.

So what was this announcement? Well, among a plethora of announcements that would normally take the headline was the announcement of Amazon Web Services (AWS) Relational Database Service (RDS) on VMware. The partnership between AWS and VMware was already daunting for cloud competitors, bringing together the leader in on-premises infrastructure software and the leader in public cloud services. But the partnership has mostly been one of simple integration, running VMware ESX servers in AWS and extending customer on-premises networks into AWS networks.

Second, the choice to deliver these new AWS on-premises services on VMware is very significant. Just a few years ago, many in the industry were questioning the role for VMware, both for ESX and for the company itself, in a world with increasing use of public cloud. VMware has consistently maintained that it is the on-premises platform for cloud and this new announcement, as well the announcement by Google for Google Kubernetes Engine (GKE) On-prem for VMware, seemingly is validation of that approach. 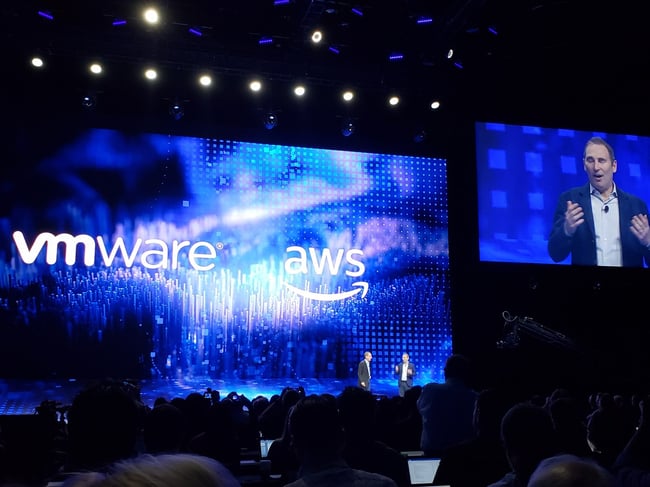 Finally, this new offering from AWS and VMware is the first time we have seen the partnership become a two-way partnership, as Pat Gelsinger described it as part of the announcement. I have long expected more of a two-way partnership, where AWS would use the partnership to land its services in VMware's strong on-premises customer base, in addition to VMware using AWS to provide a common infrastructure platform based on ESX. This means that AWS is not just entering into the on-premises part of hybrid cloud but is leveraging VMware's existing install base to land AWS services.

The end result is that there has been a fundamental shift in the hybrid cloud world and we should look to see how the other hyperscale clouds and on-premises vendors reacts and whether we see some additional, closer partnerships as a result.

Want to learn more about VMworld? Follow me on Twitter @edwinyuen, check out the ESG On Location video from the event below, and visit the ESG VMworld 2018 page.