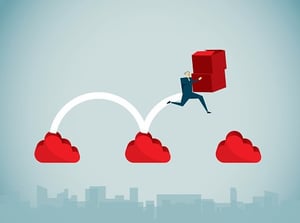 Google has announced their intent to acquire Velostrata, a startup that helps corporations migrate their virtual machines and applications into the public cloud. I think this is a very bold move by Google, one that shows their commitment to supporting and helping not just cloud-native applications but also legacy applications.

Personally, I have a strong interest in cloud migration because I led the Microsoft VMware to Hyper-V migration program in a prior role and learned the "in and outs," challenges, and difficulties of migration. It definitely is not nearly as easy as many make it out to be. The simple process of conversion is not even half the problem. The other half is ensuring the "converted" VM actually boots without significant errors, runs reliably, and still has a working application.

I've met with Velostrata and their CEO Issy Ben-Shaul several times and was impressed with their unique approach to migration, including creating their own staging cloud for the conversion, which allows the conversions to be tested, reversed, or even duplicated. It's a process and technology that can remove a significant amount of difficulty and inefficiency for companies performing migrations.

There have been several rumors of other acquisitions by Google over the past several months but the move to acquire Velostrata makes a lot of sense for Google Cloud Platform. If any company doubted that Google was serious about legacy VMs and workloads, they should take a very deep look at what Velostrata offers to understand how serious Google is.