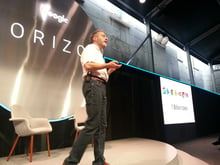 Some people may think all major public cloud providers are alike in their network capabilities. Amazon Web Services, Microsoft Azure, and Google Cloud offer direct connections between data centers and their cloud through AWS Direct Connect, Azure Express Route, and Google Cloud Direct Peering (or VPN), respectively. At a superficial level, all systems seem similar. In practice, there are significant differences between cloud networks, and from Google’s view, that stems from how the network is run.

At Google Horizon, an enterprise customer event held recently in San Francisco, the internet giant highlighted the importance of its networking infrastructure to how Google Cloud operates. Cornelius Willis, lead for solutions and technical marketing at Google Cloud, told me in a discussion during the show that the “network is the cloud,” which reminds us that without the network, there is no cloud.