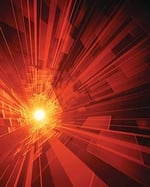 The Jericho Forum was way ahead of its time, preaching de-perimeterization before the deluge of cloud computing, IoT, and mobile devices over the past few years. Now that these IT initiatives are well established, de-perimeterization requirements have become much more acute at many enterprise organizations. Rather than rolling their own perimeter-free network security on a piecemeal basis, CISOs are looking for someone (anyone!) to step up with a reference architecture they can evaluate and emulate.

Enter Google with BeyondCorp, which it describes as, “a new approach to enterprise security” that was highlighted in a recent WSJ blog.

So what the heck is BeyondCorp? Remember the speakeasy movies where characters had to knock on the door and say, “Joe sent me,” before being granted admission? Well, BeyondCorp is sort of an Internet equivalent of this process.

With BeyondCorp, all users and devices reside on a quasi-public network, so no LANs, VPNs, etc., and all users and devices must be authenticated before being granted access to applications and IT services. User authentication requires multiple factors, not just usernames and passwords, while all devices are managed and approved devices as they are instrumented with digital certificates tied to each system's Trusted Platform Module (TPM). Upon authentication, all devices are then assigned to network segments (VLANs) based upon business and security policies in order to restrict them to only those network assets necessary to do their jobs. Finally, all network traffic between clients and applications is encrypted by an externally-facing network proxy.

On the back end, all externally-facing applications reside on semi-public networks with private address spaces and all applications have services for things like load balancing, global reachability, and DDoS protection. Aside from user and device authentication for network protection, each application is protected with entitlement policies that makes authorization decisions based upon the user, device, user group, artifacts on the device, and device location. In other words, application access and usage is dynamically controlled based upon risk factors.

I’ve really just scratched the surface of the Google BeyondCorp architecture as it is beyond the scope of my humble blog to provide deep technical details. Anyone interested in this increasingly-important topic should really read the Google BeyondCorp paper for more details. In my opinion, Google really deserves credit for making the Jericho Forum’s early 2000s vision into a reality.

In addition to Google, other security vendors offer a variety of tools and technologies that can certainly fit into a similar perimeter-free architecture. CISOs who want to follow Google’s lead with a more off-the-shelf approach should look into: