Hitachi Vantara Talks What’s Next at NEXT (Video) 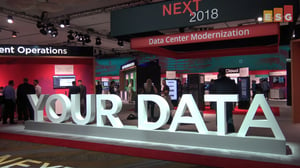 Last week saw the 2018 Hitachi Vantara NEXT conference. For those of you not following along closely, Hitachi Vantara is the artist previously known as, well, many other things...!

One of the ongoing challenges the company faces (both for itself, and indeed to a greater extent when we consider it in association with its Hitachi parent) is how to describe its panoply of abilities, both IT and otherwise, in a cohesive manner.

Well, the Vantara folks took a stab at fixing that (at least for themselves) at the event by squarely focusing their commentary, capabilities, and entire reason-for-being on DATA. Given the state of the world - even beyond IT per se - that’s a pretty big and attractive sandbox to play in! And so - with renewed [at least publicly] focus, how is the company doing? The following ‘ESG On Location’ video has insights from my colleagues Edwin Yuen and Mike Leone as well as myself.

This is a fascinating “play” to watch. As a company, Vantara - both standalone and when integrated with the overall Hitachi - seems very well suited for where the puck is going to be soon if it’s not quite 100% there already. Its Japanese patience and “double-bottom line” social commitment combine to make its somewhat early arrival at what’s next (no pun intended!) perfectly fine. Frankly, it is only those companies like Hitachi [Vantara] that think of how to - and can afford to - move one step ahead of the market that will be able to collect a larger-than-proportional share of the eventual commercial rewards. As was mentioned from the main stage, “the game has changed,” and we are in “a new phase of digital transformation.” Hitachi Vantara was giving us glimpses of what can be next (pun now intended!) and how it can play in the emerging new game.