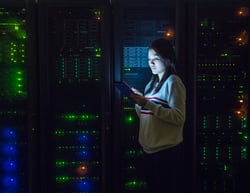 In a recent briefing with George Crump, Chief Marketing Officer of StorONE, we learned about Seagate and StorONE's latest offering that is designed to provide affordable high-performance and high-capacity storage solutions. The offering from StorONE, which became available in early March 2021 and features Seagate’s drives, was created specifically with a focus on databases, virtualization video surveillance, file, backup, and archive capability.

The problem Seagate and StorONE solves

According to Seagate and StorONE, storage software struggles to continue to grow largely because of the dependency on 20-year-old Linux IO stacks. Total cost of ownership is also perceived as getting worse. In addition, the entry costs of storage systems and the cost to manage storage continues to worsen. On top of this, most data centers have 6 to 7 different storage systems. StorONE is looking to address these challenges.

During the briefing, Crump indicated that StorONE recognized these challenges and is looking to offer a better way. The recent release of StorONE High Performance IO Engine provides a different approach. First, the new offering is not dependent on Linux and provides new data service orchestration algorithms that coordinate IO flow through the platform’s software. By doing this, StorONE claims this feature does not impact performance.

With this approach, StorONE is addressing the inefficiencies in the traditional st

orage stack, which has typically been complex and slow. StorONE claims a simpler and more efficient way to interact with the storage stack. By rewriting and flattening the storage stack, StorONE places its high-performance storage engine in conjunction with the orchestration data services layer. This, combined with new storage virtualization algorithms, increases efficiencies and simplifies access for applications to access data and is provided on the latest StorONE Exos hybrid storage array.

According to Crump, the benefit is that IT no longer has to purchase drives to just improve performance, they can purchase them for capacity. This, combined with the platform’s high-end processors, as well as the use of write cache, allows the IT organization to keep up with hardware demands.

StorONE also claims they have the fastest rebuild in the industry. Why? Crump states that to rebuild volumes using 14TB drives takes less than 2 hours to complete. Rebuild times are important because failed drives put the data at risk. If a second or third drive fails, this increases the time spent to ensure a protected state.

In addition to the rebuild time, StorONE has the ability to perform parallel reads and writes and can read from multiple drives simultaneously. This functionality allows for writes to multiple drives at the same time and removes the requirement for hot spares.

The hard drive tier is optimized as well. This is done by writing sequentially to the tier and utilizing the read algorithm to deliver five times read improvement from previous platforms. But this also means the user needs to leverage hybrid storage properly as well.

Historically, hybrid storage has provided no write performance benefit as flash was used for read-cache or write-through cache. Often the flash tier was less than 3% of the platform’s total capacity, meaning most of the reads came from the second tier. This also caused performance latency of tiering while actively writing data. Not to mention, the second tier is not optimized for sequentialization of writes and slows down the rebuild time – often to hours or even days for hard disk drives.

Finally, Crump discussed how StorONE’s vHybrid solves these issues while offering maximum efficiency and simplifying operation. This approach increases the size of the upper tier and offers sequential writes to lower tiers to increase performance.

The benefit of this approach – a single platform providing the ability to deliver mixed use cases across the platform. Several of the use cases optimized for the platform are:

Is this the next best platform?

It is exciting to discuss this new offering with StorONE and Seagate. As different industry problems present themselves, vendors need to explore new ways to address these challenges. StorONE offers new approaches to address the orchestration data services layer but also promises to provide protection with no impact to performance. Other competing vendors will need to “raise the bar” to answer with their own innovative approaches to solve these industry challenges.

Want to learn more or tell me about your approach? Let’s talk. If you are a vendor or an IT professional, I look forward to learning about your business challenges and discussing new and exciting ways to effectively solve these problems.