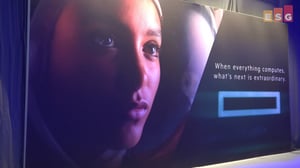 Here is my summary video from HPE's latest Madrid installment of its Discover user event series. It's a little different from the usual ESG On Location video format inasmuch as I spent the vast majority of my camera time interviewing HPE execs and customers, rather than my ESG colleagues. The customer interviews were done for HPE and will appear on its channels over the coming weeks. Meantime, in this summary video you'll find sample "snippets" from some of the HPE exec interviews (with full versions to follow soon), together with a comment from me about mega-events in general, and then specifically my key takeaway from Discover in Madrid.

Mark: Late last month, I was in Madrid for HPE's Discover event. The city was uncharacteristically gloomy, chilly, and wet at the start. Not good when there's a taxi strike right in the middle of the event. But luckily, the weather changed to bright, although still chilly. IFEMA, the conference location, was like all such specialist mega-meeting places. It was huge with a soulless, could be anywhere feeling, and sadly a long way from the beauty and drama of its namesake city.

But, turning to HPE, Meg Whitman turned the reigns over to Antonio Neri. He inherits an inarguably very different company from when Meg arrived as CEO, but only somewhat arguably, one that's more focused and better equipped to serve the contemporary, hybrid IT world. Big conferences from broad system vendors such as HPE have an inherent challenge, there's so much breadth that any summary statements are destined to be either ironically narrow or inherently to lack tangibility.

Now, this is categorically not an HPE-specific critique. One finds that the specifically detailed news on the often large amounts of incremental value at system vendor conferences are only revealed and best explained on the expo floor, the Transformation Zone in HPE parlance, and in breakout sessions. Otherwise, one's diet is of tasty meals that comprise the enterprise of the future, no doubt served with a side of hyperconnected edge, garnished with security control and with blockchain and AI to taste.

I'm categorically not being negative. The challenge for IT behemoths is to summarize, but it's a bit like asking the heads of Library of Congress and Smithsonian to jointly give us the gist of the essence and meaning of their combined collections in 20 minutes. It'll be hard to avoid, "We have a lot of cool books and other great stuff to serve the inquirer of the future," etc., etc.

So how to get at least some of the real story? The answer or at least an answer is to talk to some of the real people, both from HPE's ranks and its customers. I spent a good deal of time at Discover talking to a range of executives from HPE's Hybrid IT Business unit, as well as an equal number customers. In all cases, I was trying to get to the real story, whether a vendor intentions or a user needs and value in plain conversational English.

Here are some sample sound bites from some of the HPE folks. The customer interviews will appear on HPE's website over the coming weeks, and I'll let those subjects tell their stories in their own words.

Bill: The storage landscape has radically changed as you and I have talked before, certainly over the last year, let alone the last four or five years. And customer conversations are moving from, you know, what I call flux capacitors and storage megaflops to how do we sort of get applications…

Gavin: The fundamental problem customers are tying to solve, we call the app data gap. This is this disparity between what the application and the user expects things to happen, and what might actually happen. So every time you see that spinning wheel waiting for data, that's the app data gap. We want to eliminate that, so we're gonna look across the whole infrastructure stack, predict and prevent problems, and give you that full end-to-end, you know, experience that you want in your application.

Mark: If I was to let that out, get rid of the spinning wheel of death…

Gavin: Get rid of the spinning wheel of death.

Mark: Whatever causes that, yeah.

Gavin: Irrespective, and take the pain away from troubleshooting that, so you don't have that problem and then trying to find the needle in the haystack. Is it the server? Is it the network? Is it the storage?

Patrick: What we've seen from customers is that their buying lines are changing from horizontal to vertical. Where in the past that you come to HPE for compute, then go to a networking vendor for networking and then a standalone storage vendor for storage, that is moving to more of a vertically-oriented approach in terms of "I have this workload or I have these SLAs, and I want you to provide me an integrated, tops-to-bottom experience that's gonna solve that problem for me." Whether you wanna call that hybrid IT or private cloud or a converged systems, it's sort of the same principles at the end of the day, you know, on how we essentially make our portfolio. We're a portfolio company, we think that portfolio companies in the end are gonna win, as opposed to just best of breed.

Susan: I think one of the most exciting things that we're doing is bringing artificial intelligence to the data centers. So that really is transformational. It's really the forefront of building an autonomous data center. So we're using the capability that we acquired from HPE Nimble or Nimble Storage, HPE InfoSight, and we're building that into our portfolio. So we're using HPE InfoSight to bring that predictive analytics capability. You know, what's great about that is it covers not just storage, but the server stack, the networking, and so it really gives people insight into exactly what's happening around their storage infrastructure.

Mark: What can I say by way of summary from what they told me and what I gauged at the event without falling foul of the challenge I mentioned earlier? Simply put, there's loads to applaud across HPE. I mentioned Madrid's temperature earlier, and the Celsius or Fahrenheit situation for HPE is fascinating. It has morphed into being among the hottest of IT providers, but it still cannot crack being among the coolest. It has a fabulous portfolio but still too often projects a feeling of impressive functionality and capability rather than one of also being inspirational and aspirational. That said, given that it's easier to fix projection than portfolio, I think the forecast remains good.