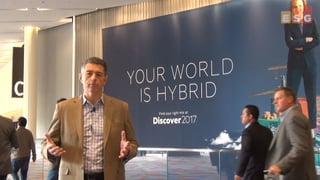 This month saw the US version of HPE Discover in jolly old Vegas. Apparently - with apologies to R.L.Stevenson - Jekyll and Hyde are alive and well and embodied in Hewlett and Packard! Because, boy is it hard to figure things out as far as this venerable corporate IT behemoth goes.

In my "ESG On Location" video from the event I try to get to an insight about HPE that is more nuanced than merely a summary of the contemporary newsfeed; I should ask you to view that video first to get a flavor of things in Vegas and then I will add a few more explanatory comments.....

Thanks for watching. And now...back to our regularly scheduled program - "Jekyll, Hyde, and the Strange Case of Superficiality." Beauty - or even perception - may only be skin deep; the same mantra can apply to trying to figure out businesses. While it may seem that start-ups and private companies are the hardest ones to really analyze in this industry, I'm not so sure that big public companies are always intrinsically easier! Just because they disclose and say a lot does not mean it's easy to divine how they are doing or what they mean! (hence my comment in the video with my thoughts that HPE might strategically be heading in the same direction but to a new destination....).

Yes there's a Jekyll and Hyde feeling at times - but I'm beginning to feel that Messrs Hewlett and Packard might be willing to forgo the occasional superficial question mark in favor of achieving a bigger, longer-term, substantive goal. And then HPE needs to look in the corporate mirror, accept its new identity (which I think is there, and valuable, but not yet well encapsulated), and start to declare it clearly and strongly. I'll start the ball rolling: HPE talks of "a world where everything computes"....perhaps it should be the "optimized IT for every business that computes". I ain't no copy-writer, but you get the drift. Superficially at times today's HPE can look like Mr Hyde, but Dr Jekyll is there if you look deeper.