HPE is law-abiding in Las Vegas 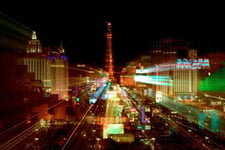 At HPE Discover recently the "marketing law of big companies" (which I just made up) was on full display. In essence the premise is that the bigger you are, the harder it can be to make a specific point. I absolutely don't mean there were no big points to be made, but when you have a bunch of them, it is hard for each to stand out. The amalgam can even be a tad plain: once you boil too many — albeit good — things down, you can get too much generalization.

At the event it was easy to feel one was being beaten into submission by real and potential goodness. And ironically, as with any time there's too much of a good thing, one can stop appreciating it. Take a look at this short video summary of the event that I made with my colleague Terri McClure: yes, we dip a bit deeper into storage than other things (just as an example and because that's where we both live), but mostly it's an attempt to extract a real high-level flavor from the multitude of ingredients on offer.

And at the risk of overlooking myriad specific "goodnesses" all around the event, here's what I think the take-away from the event is:

With the major trends in IT right now — especially convergence, cloud-deployments, and software (an app...) for everything — I suspect we are in a phase of creating another "law of big companies": simply, it is that the next/emerging era of IT is going to be dominated by them, more than at any time since the mainframe era.

And, despite all the other clamor and glamor, HPE was using such things as its Composable Infrastructure, Common Data Fabric approach and The Machine development to firmly stake its claim that it wants to comply with that law too!

Announcer: The following is an ESG On Location video.

Mark: Welcome to HPE Discover from lovely Las Vegas once again. So clearly HP Enterprise is a company where there are lots of questions right now, but the interesting thing for the organization is also the sheer breadth of the company, its capabilities, everything from its individual product divisions, through to HP Labs. Means that if it can get itself organized and executing correctly, there's also enormous opportunity for the company.

We're actually here in the Palazzo and the Venetian. One of the things that's perhaps most iconic about this center is St. Mark's Square, and I want to use St. Mark's Square as a metaphor for what's going on with HPE. There are many things in St. Mark's Square here that really should belong, like this, and this, and even this. But then there are other things there that you really wonder whether they should be there at all, like this, and this, and this. With what's going on with HPE right now, the divestments and the mergers and spinoffs that Mega's been making, what remains to be seen is whether HPE has got rid of the wrong parts that it didn't really need for success, and still has the right parts that it needs to deliver on composability, and become that key player to the IT infrastructure.

So I mentioned composability as key to the company. Right behind me here, you can probably see some of the Hyper Converged Systems and Synergy, which is really what HPE is putting a lot of the future on. That said, let's be clear, there is still an enormous volume of traditional business. I asked my colleague, Terri McClure, who was with me at the conference, to talk about both that traditional business and the changes in HPE's overall portfolio from the storage business perspective.

Terri: One of the reasons I was really excited to come to Discover this year was to find out, really, just what was going on with the storage business. Because when you look at the market share numbers from those firms that track such things, HPE's storage has been growing quarter, over quarter, after quarter. Some cases as much as 16% in a single quarter, while most of the other vendors are contracting in share. In fact, the most recent quarter, HPE actually became the number one storage vendor in the market, which created a few parties around here. They've been celebrating that, and they should because it's a really tough climate out there.

Now, what I've learned about the secret sauce behind their growth is, they've really, really benefited from the power of the portfolio. Being able to have the converged systems business, the hyper converged systems business, and the server business, has really benefited the storage business, as they re-engineer their sales force to do solution selling and so sell business outcomes to their customers. They can come in as the one-stop shop, the one throat-to-choke, as they say, and provide an end-to-end solution for the users. So I think it's really benefited them, as the company's trimmed down and really focused under Meg Whitman. What'll be interesting to watch moving forward is how the dynamics in HPE play out against daily MC, which will also get some significant portfolio power once that merger is complete and they can focus. So it'll be an interesting market to watch. We'll see if HPE can keep it up, but for now, congrats to the storage team because it really is pretty impressive what they've done in these last few quarters in a very tough market.

Mark: I started this report by talking about the extremely broad capabilities that HPE has, but of course, to have success in this market and over the next few years, you need more than just internal capabilities. Quite frankly, whether you're HPE or a startup, you need the market to be congruent with what you can do. Now, having broad capabilities means HPE can be congruent with a lot of different things in the market, but also frankly the changes going on in the market right now, particularly with convergence, particularly with software definition, terms where HPE would say composability for example. Whether that be around infrastructure, whether that be the newly announced data fabric everyone's talking about. But all these bigger market changes, requirements, and drivers, and opportunities, that if HPE plays its considerable cards right, it really could become an even stronger force over the coming years than it was a few years ago.