"Come together, right now…over me"
-The Beatles 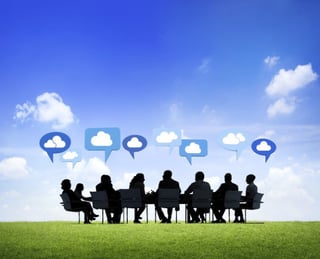 Many IT decisionmakers find themselves at a crossroads today: how do they best maintain two distinct sets of IT environments? There's the legacy applications that run the business; and the next-generation, cloud-native applications that in many respects, represent the long-term health and future of the business.

Should they, like in The Offspring song, “Keep 'em separated”? Or should they instead look for ways to unify the underlying IT infrastructure that services these two distinct worlds? After all, there are significant operational differences between the two. On the one hand, legacy applications change one or twice a year at most. On the other hand, cloud-native applications change as often as two to three times a month.

Consequently, the priorities for managing these two environments are typically quite different. IT planners generally focus on simplifying their legacy applications while seeking opportunities to wring costs out of the environment. In contrast, businesses are looking towards their cloud-native application environment as a way to seize on new market opportunities. Here it’s all about business speed, time-to-market and turning on a dime.

It would seem that these disparate objectives would necessitate the permanent cleaving of these two environments. With their recently announced “composable infrastructure” solution, however, HPE begs to differ.

As the name implies, HPE’s composable infrastructure solution is designed to enable application developers, line-of-business owners and IT administrators, to deftly compose and provision private cloud resources in much the same way that IaaS resources are dynamically allocated in public cloud environments like AWS. The secret sauce? The ability to treat IT infrastructure as code.

With out of the box support for tools like Chef, Puppet and Docker, HPE claims their Synergy composable platform solution can deliver the seamless DevOps capabilities businesses need to dramatically reduce operational complexity from both an administrator's and developer's perspective.

For example, provisioning the required server compute, storage and networking resources to support new business services merely requires a single line of code with HPE’s Synergy platform. Compare this to other approaches in which developers and IT administrators have to integrate with a whole slew of 3rd party APIs just to perform the same tasks. According to HPE, what takes minutes to perform on their Synergy solution often takes weeks to do in conventional environments.

HPE claims that the three keys to their composable solution design are: 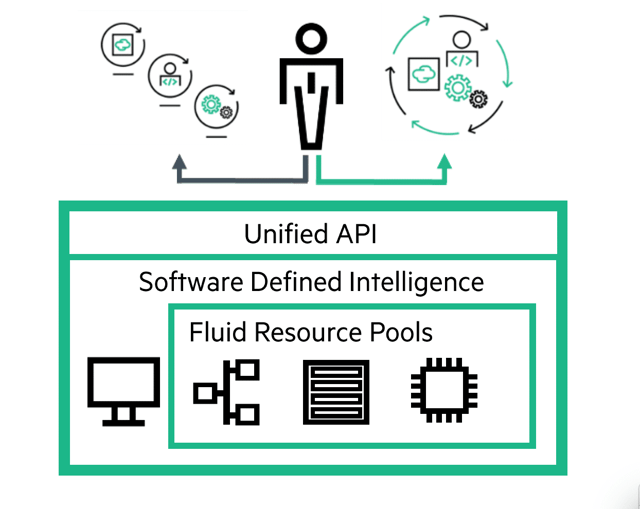 Through this design, it is possible to create dynamic, fluid resource pools across the enterprise that can be dialed up and dialed down on demand and on a dime. For example, new operating system images can be ready to boot in 15 seconds thanks to a library of images that can be quickly developed and deployed. This can deliver the dual benefits of operational efficiencies, to satisfy the need for lower costs on traditional application infrastructure and enhanced business speed and agility, to meet the needs of ever-changing cloud-native application environments.

The belly of this composable “beast" is a 20U chassis that can be flexibly outfitted with a mix of server compute and storage resources to meet the variable workload requirements across traditional application environments and next-generation, cloud native application infrastructure. The embedded intelligence is a “composer blade” that effectively provides all the workload elasticity required to grow and shrink resources across a rack and/or rows of racks configured with Synergy platform systems. 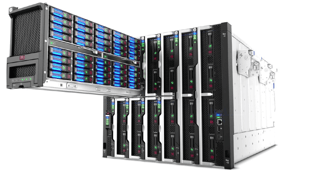 As importantly, external server and storage resources (HPE branded only in the initial release) can be added to these resource pools and be fully managed under the Synergy composer management interface to provide end-to-end private cloud infrastructure management capabilities.

The net result is that businesses can, in effect, build out a private cloud IaaS solution that can be leveraged across 100% of all the workloads in the environment - regardless of which application camp they fall in - legacy or cloud native apps.

HPE states that their composable infrastructure architecture is in a class all by itself. It composes (no pun intended) attributes befitting converged and hyperconverged architectures - capable of hosting Tier-1, high performance, mission critical application workloads while providing the infrastructure scale-out capabilities typically demanded by cloud native applications.

In a shrewd move, HPE is providing financial programs to enable businesses and service providers to deploy an IaaS utility, with fully configured Synergy systems, without incurring the up-front expense of all the associated hardware and software. Once these assets start being consumed by end-users, businesses can then start paying down the costs of the infrastructure.

Interestingly, since HPE announced their intention to bow out of the public cloud service provider space, they can now go to their service provider and enterprise customers and credibly argue that they are totally agnostic about the cloud. In other words, without a public cloud axe to grind, they can help their clients focus on a hybrid cloud strategy that makes the most sense for their respective businesses. And with many organizations still in the early throes of formulating their private cloud strategy, HPE’s composable solution, in tandem with their Helion cloud management technologies could help give them a strategic beachhead in the data center.