'Hybrid IT' Is Great – Unless It’s Just Pretend 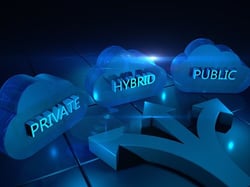 Pretty much every IT practitioner I talk with agrees that “hybrid IT” is going to be the norm for the foreseeable future. Conceptually I agree…and I recently blogged about a very simple way to look at this hybrid IT world that will underpin the delivery of contemporary applications (take a look at that video blog, "The Three-legged IT Stool").I want to draw out one particular point I made, and emphasize it with added clarity. “Hybrid IT” does not mean—or at least it should not mean—simply having some amount of on-premises-based IT activity and some amount of public cloud-based IT activity. That situation is exactly what it reads as: There is some amount of on-premises-based IT activity and some amount of public cloud-based IT activity. Period. Imagine having a hybrid car but only ever using one engine (the electric or the gasoline) for any given journey. The whole point of hybrid is to optimally use a variable mix of resources…whether that is to propel a car or to deliver IT solutions, the point is the same. Hybrid is always about optimized balance (sometimes with an element of choice) between available resources, and almost always will be preferable (and more optimized) if it is automated, granular, and flexible.

Hybrid IT is not about simply having “some of each” (on-prem and cloud). That’s just “some of each”! It is about having “some of each working in dynamic, as-seamless-as-possible, and optimal harmony.” Of course, an unconnected “some of each” will work for some people—perhaps to parry awkward questions, and allow them to portray themselves (however erroneously) as being part of the contemporary IT world. But it is not hybrid IT.

That is exactly why I wrote this in the last blog: “The balance between on- and off-premises gets a lot of attention right now; however, the real debate/challenge/opportunity is not deciding the optimum mix between these two (since that will change both over time, and also as commercial realities, vendors, applications, and business needs morph), but is rather about how one can make that 'dynamically changing optimum balance' work in an integrated, automated and secure fashion.”

Hybrid IT inherently demands a mix of resources; but that mix is—in my view—a necessary but not sufficient determinant of whether you have actual hybrid IT. It is making those mixed resources work together that really matters…and is really challenging…and is really full of opportunity for those (vendors and users) who can get it right. If all you have, or offer, is “some of each” in splendid isolation, then you are merely pretending to be in the hybrid IT game.