In 2016, Enterprise Storage will be defined by the cloud 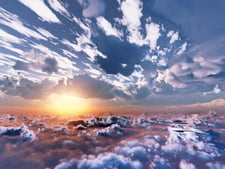 As we move into 2016, it is time to take stock of the events that occurred in the storage industry in 2015 and forecast the New Year. Historically when making annual predictions, technology trends dominate forecasts. For 2016, it would be very easy to repeat that trend. With expected increases in adoption for solid-state storage, software-defined storage, object storage, and even hyperconverged; much of the dialogue for this blog could focus on the storage technology shift that the industry is experiencing. Doing only that, however, would ignore the most significant trend in enterprise storage, “The Game of Clouds.”

This term is my homage to the novels of George R.R. Martin. Similar to the battles and strategies that make up much of the content in those novels, the conflicts forming in the world of IT look just as epic. The established guard of the traditional storage systems manufacturers have been hit hard by IT shifts to cloud services. Increased adoption in cloud offerings, such as infrastructure-as-a-service or software-as-a-service, has created a serious dent in the business of traditional storage manufactures.

Look at the numbers: Amazon Web Services reported quarterly sales of over $2 billion in the third quarter of 2015, a 78% increase over the previous year. In Microsoft’s 2015 annual report, Microsoft stated that annual “Commercial Cloud revenue grew $3.0 billion or 106%” annually. Compare that to EMC’s numbers for the same period: EMC product revenue from the third quarter of 2015 decreased at a rate close to 4% annually, while EMC’s overall revenue slightly increased annually thanks to a rise in services revenue. These differences are the drivers behind the impending conflict. The cloud is growing, and storage sold for on-premises deployments is, at least for the moment, stagnant.

The storage industry in 2016 will be defined by how the IT industry responds to the cloud services and customers demand for those services.

More alliances will be formed

Unlike competing against other IT products, competing against cloud solutions is not as straightforward. The economies of scale offered by cloud environments make it impractical for every IT player to simply build and offer their own full portfolio of cloud services. Additionally, the disruptive benefits provided by cloud offering make it a challenge for on premises solutions to simply offer incremental innovations as a way to compete. The net result is that for many IT and storage providers, "business as usual" is no longer a viable strategy.


As IT providers seek to increase viability in this competitive cloud era, becoming bigger via acquisitions or partnerships is one option. Last year, I projected storage component manufactures would make similar moves, and we saw this with the Western Digital acquisition of SanDisk, as well as HGST, a division of Western digitals, acquiring Amplidata. While I expected those moves to be driven primarily by the potential of vertical integration, upon further reflection and investigating the motives behind Dell’s acquisition of EMC, and I suspect the rise of the cloud played a significant role.

In 2016, I expect that the Dell and EMC combination will serve as the catalyst that sparks more movement, partnerships, and acquisitions. IBM announced its intent to acquire Cleversafe and integrate the object storage provider into its cloud business unit. Similarly, NetApp recently announced its intent to acquire SolidFire to help strengthen its solid-state storage portfolio and to better deliver cloud storage economics. These industry’s appetite for these types of moves are not finished, and we will see more acquisitions in 2016 as organizations seek to strengthen themselves to compete in a cloud solution-driven world.


Other ripple effects of the cloud:

Every, or nearly every, storage player will have a hybrid cloud message

This is less of a prediction since many storage players already have hybrid cloud messages. I expect that 2016 will see an amplification of those messages. Players with existing cloud messages will strengthen their efforts, and those new to the hybrid cloud space will push the message even further.

To have a hybrid cloud, some data and applications need to live on the cloud and some need to remain on premises, but which ones? The answer is different based on the organization and the answers are not always simple. To make hybrid cloud storage a reality, organizations need to understand their data and know whether it makes sense for that data to remain on premises or move to the cloud. I expect that over the next year, the industry will see more tools to help organizations understand the performance, accessibility, security and compliance needs of their data.

Finally, one storage technology projection: This is the year, the industry starts to seriously evaluate innovations that leverage some form of solid-state technology as either a compliment to or a replacement for server memory. Micron and Intel announced that they expect 3D XPoint to start becoming available at some time in 2016. Technologies such as these are poised to disrupt the server memory space. Intel and Micron have claimed 3D XPoint will be 1000 times faster than NAND and 10 times denser than traditional memory. While true adoption may not rise until 2017 or beyond, towards the end of 2016 server vendors will start to communicate plans around these technologies.

Ultimately 2016 will be about the continued rise of the cloud and how on-premises IT storage solutions providers respond. It will be an interesting 12 months, and I am looking forward to seeing how the industry unfolds.