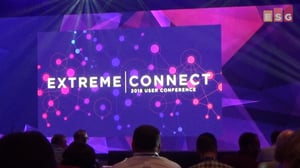 Last week I attended Extreme Connect, Extreme Networks' first ever user event. This event attracted roughly 500 people from across the globe. Nestled in the Weston Kierland resort in Scottsdale Arizona, this event was the culmination of a five-month tour to introduce customers to the new Extreme. You may remember that Extreme recently acquired Zebra wireless, Avaya networking, and Brocade Data Center Networking Solutions.

The resulting company is emerging as one of the top end-to-end suppliers of network solutions for enterprise and midmarket companies. I was able to attend several of the keynotes and speak with a number of customers that clearly view Extreme as a strategic partner and are excited about working with a company dedicated entirely to networking. In fact, many new Extreme customers commented on the world class support and service they now receive, an area in which Extreme has always excelled.

I was most impressed with the renewed focus on the customer. It would be easy to remain inwardly focused after making these large acquisitions. However, Extreme has chosen to do the exact opposite. It will drive even greater focus on its customers, and has even changed its tagline to match: “customer driven networks.” The sessions also provided a high-level roadmap and several new technologies and capabilities (under NDA for now) that will be announced soon. Judging by the customers' reaction to these new solutions, I anticipate they will be well received (more on that later).

So, while there was plenty of excitement and energy from the new customer base, there is still plenty of work be done. The company needs to execute against its roadmap and deliver on its new capabilities. The good news is that the company (and its employees) have been re-energized by the influx of new talent and the senior management team has done a good job keeping everyone focused on what is important – the customer.

For more on the day, check out my video blog recorded at the event.