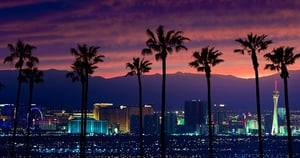 It was surreal flying into Vegas on Monday to attend NetApp Insight at the Mandalay Bay hotel. NetApp this week had to deal with something no company ever expects to or should have to deal with: a mass shooting at the venue where their event was to kick off the next morning.

Faced with a very difficult decision, the company decided to cancel the day 1 events, but proceed with business (almost) as usual for the rest of the week, kicking things off with a keynote Tuesday morning. After all, it had about 3,200 people already in town for the technical conference on Monday, and expected a total of 4,100. With so many people already here, looking at logistics, they decided to move ahead.

NetApp CEO George Kurian was great in the opening keynote—he set an appropriate tone, kicking it off with a standing moment of silence, and notes about unity and perseverance. Then we got on the conference topic: data and its potential to drive change. George wrapped it up with a beautiful story about data helping save a young boy who was diagnosed with a tumor, and data saved his life—the kicker was that it is his son. There wasn't a dry eye in the house. And he closed with reminders about love, unity, and caring for one another. I wish I could quote him but I was too busy listening to take notes. He exhibited the leadership traits that have made him successful in his still relatively short CEO tenure at NetApp. Compassion, caring, strength, optimism for what the future holds,  and hope.

On a more general note, it's somber here. The streets were deserted last night—areas we drove by on the way from the airport that are usually packed were empty. The bars and casinos almost empty. Almost half the analysts didn’t come, and we have a half empty room for the analyst summit. The NetApp folks I’ve spoken to are all traumatized—most really just want to talk about what happened. A number of their colleagues have left. None that I’ve spoken to were there, but the police aftermath—swat teams everywhere, evacuating the hotel, searching guests (at gunpoint!), getting locked out of the area overnight without access to their belongings, the search for a place to sleep and eventually finding somewhere miles away, and not being sure if there were other shooters or if the situation was fully contained—was horrendous. It's going to take some time to process and deal with what they went through. It was just too close for comfort.

The crisis communications team has done a tremendous job keeping attendees informed, from the first warnings that something was wrong, to the rescheduled sessions and offers of grief counseling. Again, faced with something you just can't train for, the team was (and is) amazing.

It must be incredibly difficult to balance the tone of an annual user conference, which is supposed to be energetic and uplifting, with the somber aftermath of such an event, but NetApp continues to do a good job. After initially announcing the closing celebration would be canceled, they are moving ahead and rather than having a celebration, it has been recast as a "coming together" event.

When I arrived last night several areas were still locked down. Mandalay Bay Valet parking and drop off areas, and Las Vegas Blvd, are all still closed. There is still extra security everywhere. I had to get my bag searched and go through a metal detector just to get into the conference area. There are police on the casino floor. And rumor has it the secret service has been around to secure the venue for the POTUS. It's going to be a while before things settle down. This is not Vegas as usual. But NetApp is trying to conduct business as usual to get some sanity back.