Is the "Silver Lining" of Clouds Just Free Money for Some [of Your] Vendors!? (Video) 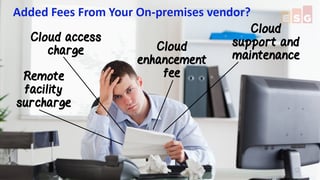 The video below pretty much says it all: while the value of public clouds - most often as a part of the growing 'hybrid IT' model - is indisputable for the majority of IT organizations, there are some vendors that have seen the opportunity to capitalize at users' expense. Those wanting to make a quick buck are likely driven by a desire to make the cloud look artificially more expensive than it is, as much as a desire to protect revenues....but either way it is insidious. It is insidious for two reasons: obviously it is just wrong, but also it is another example (like the bad kid that gets the whole class detention!) of the minority spoiling things for the majority.