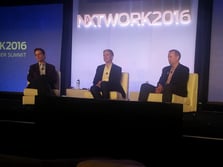 At Juniper Networks’ recent NXTWORK customer summit and analyst day, the major announcement was Software Defined Secure Networks (SDSN), a platform for policy, detection, and enforcement for every element of the network. This has been covered in the press and on Juniper’s web site.  The photo to the left includes Rami Rahim (CEO),  Jonathan Davidson (EVP), and Mike Marcellin (CMO) during the analyst day Q&A.

Equally interesting was Juniper’s long-term vision for an automated network, which they called a self-driving network. In the same way automated cars may start to take over many manual driving tasks, so too might automated networks take over manual networking tasks. This vision, which happens to go by the same three letters as Software Defined Networks, is ambitious. At the closing session, Pradeep Sindhu, Founder, Vice Chairman, and CTO presented a view of the state of the network, and Dr. Kireeti Kompella discussed the self-driving network.

Automation is the glue in self-driving networks, and is in Juniper’s DNA. Their first product release did not even have a CLI, and required programmatic access. They’ve added a CLI, but the availability of APIs and libraries have continued in the Juniper product line. 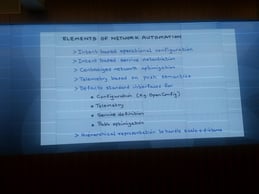 The vision of a self-driving network includes these components (photo to the right shows a slide from a presentation):

Many of these elements are not novel by themselves.  Cisco has advocated an intent-based network control—also declarative (as opposed to imperative) control—in its Application Centric Infrastructure (ACI) and centralized network system, and network optimization is often understood by modern SDN controllers and some telco networks. Interfaces are becoming standardized, and telemetry is starting to find its way into the product lines of many firms including Cisco (Tetration) and Arista (CloudVision).

What Juniper wants to do is incorporate all of these goals into one vision. If they manage to pull it off, it will make a significant difference in how networks are designed and operated today. Despite the promises of SDN, many of its aspirations have not been realized in 2016, and traditional network operations still dominate.

ESG’s own research shows that network automation is an area of interest for enterprises, but how they define automation differs widely, and automation is seen as a means to an end, as opposed to a goal in its own right. Goals such as security and compliance are the ultimate goals to achieve.

Network automation is not a way to cause unemployment (as self-driving trucks may do to the truck drivers in the long term)—it frees up the network engineers’ time to perform higher level tasks that add value to their organizations. It also enables key goals, such as network-based security to be implemented more efficiently. If attackers use automated methods for infiltrating organizations, then the defense must also be automated to match the efforts proportionally.

I applaud setting ambitious network automation goals in an attempt to modernize the networking industry. I do not know how this goal translates into product releases or road maps, but having a common vision does help steer the company’s product vision.

At an Open Networking Summit last year, I asked some panelists from various firms what they thought of the prospects of some forms of automation, and response was somewhat muted and they expected these goals to be far off in the future.

That may be a pragmatic answer to set expectations properly for the buying audience, but I do like big goals. Call them moon-shots, if you like, but we often need shots in the arm like this.