Manufacturing - The Perfect Storm For Advancement 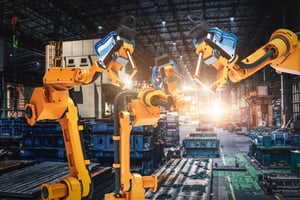 When I started ESG in 1999, the IT industry was organized essentially as follows:

All that changed with the advent of distributed computing and specialization. Companies like EMC came about and built a better mousetrap—namely storage. They told the IBM market that it’s fine to buy the mainframe and the apps from IBM, but their storage sucked—so save yourself a ton of money and buy it from us. EMC had a purpose-built solution that improved the entire system—and with it, created staff with specialty skills, aka storage admins.

Over 20 years, we’ve seen this happen over and over—to the benefit of all. Now we’ve entered an era of cloud computing and advanced BUSINESS analytics. Today, we can see multiple needles in multiple haystacks—and turn them into business value.

Manufacturing reminds me a lot of 1999 IT. Very large, very expensive machines produced by a relatively small number of dominant vendors—and operated by people who have been doing things the same way for a very long time. Often blind, unfortunately.

Even small to midsize manufacturing operations tend to have dozens of multimillion-dollar machines. When one breaks, slows down, or starts building bad parts, the whole business suffers. In an age of competitive business, that isn’t acceptable.

In manufacturing, the whole deal is yield. How many things can you make how fast? Anything that slows or halts that is money out the door. To date, the way you increase yield is to buy more multimillion-dollar machines. Just like the old IT days—where you bought the next giant mainframe so you could do more work.

The reason I like to watch this space specifically is that I know what is about to happen— and how it will turn the 300 year-old manufacturing sector on its head, because we’ve seen it before.

It’s not hard—if you know where to look. If yield is the key, then you at least know where to start. The multimillion-dollar machines are very technically advanced—but the tools to look inside of them are not. Nor are the people who run machines and factories. They have been doing things the same way for decades. It wasn’t long ago that if you asked an IT department why they back up the exact same non-changing data every single week, creating a massive downstream problem that affected everything from the capacity you manage to the ability to recover, the answer was “because that’s how we’ve always done it.” The same is now true with manufacturing.

The goal is yield. So it only makes sense that I would want to look into each machine and observe analytically what the state of that machine is, both in real time and historically. I would set a baseline and compare the current state. Over time, I could see problems before they shut me down. I would address the issues before they cost me money. I could put off having to buy more multimillion-dollar machines to increase yield, because I could get much more out of my current investments.

Seems simple, right? Except until now no one could see, so no one could predict, and no one could optimize. Things are very binary—they either work or they don’t. But problems don’t normally happen like that—they occur gradually over time. It’s only when the red light goes on that we pay attention and by then it’s too late. The advent of cloud and advanced analytics enables this problem to go away. The visibility available now lets old-school factory operators become business people.

I ran into a startup called Datanomix that is doing exactly that. They remind me of VMware in some ways in that they provide a piece of relatively benign but brilliant technology that completely changes everything in a million-year-old change-resistant market. VMware totally changed the UTILIZATION model of your server infrastructure. Datanomix does the same thing for your giant manufacturing machines.

Once visibility is established, automation and orchestration can occur. VMware did it for IT, unlocking spectacular business value for customers. It remains to be seen whether Datanomix can do it for manufacturing, but someone will. There is far too much money spent in the sector for far too weak outcomes for it to go ignored. The first step is to turn the lights on and see what’s going on. From there, the decisions become business decisions, not mechanical ones. And the money is always in the business decisions, ultimately.