I love saying I told you so. It's one of the real pleasures in my business life. I never get to say it in my personal life, so I take it out on you.

For years I've espoused the necessity to "know" instead of "guess." I've long advocated advanced market research to help decision makers come closer to "knowing." While nothing is ever perfect, eliminating risk and the associated downside with making a wrong call is never a bad thing.

ESG's research team is unparalleled in the IT business at being able to find actionable jewels that help those who pay attention to direct their respective ships to the proper heading. (It's almost boating season).

As we always do, ESG conducted our annual IT spending intentions survey late last year - published on January 31, 2012. As part of that effort, we always analyze spending trends by industry. Normally we see traditional IT big spenders such as financial services and communications/media report the most bullish budget increases from year to year. This year, however, we noted that some 65% of manufacturing organizations expected to increase their IT spending levels in 2012, second only to business services (see chart). 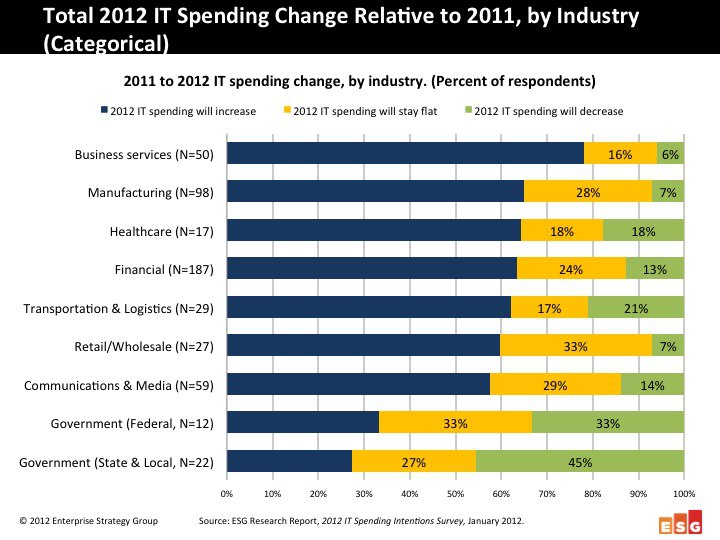 This is actually a continuation of a trend in which manufacturing organizations surveyed by ESG have consistently reported stronger IT spending year over year since a low point of 2009 - at the height of the economic crisis (see chart). 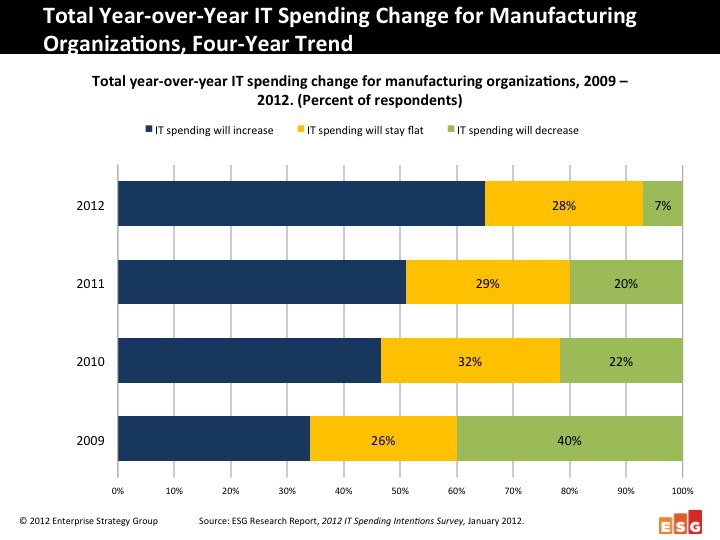 In the U.S., some recently-released economic data validates ESG's findings and the overall rebound of the manufacturing sector (February 15, 2012). First, a benchmark New York Fed survey on manufacturing activity found that manufacturers expect significant capital spending increases in 2012. Second, on February 3, the U.S. Bureau of Labor Statistics reported that the U.S. added 50,000 new manufacturing jobs in January alone, compared to 235,000 in all of 2011.

While these are great validations of the work our research team has done, the real beauty is in the underlying fact - manufacturing, shunned by IT vendors (and most other Cap-Ex companies), is back in the U.S. So if you are still clinging to your 2010 business plan theories, you are missing an important market.

Why manufacturing is back is a different (albeit even more interesting to me) question. Perhaps it is simply because the sector is now way behind due to no/limited spend over the past 4 years, or maybe it's because the economy really is stronger than I think. Regardless, those manufacturing folk are spending - so if you aren't on top of it, I promise you someone else will be.

If you are waiting a few quarters to re-tool your attack plan then you probably shouldn't bother - it will be too late. I assure you IBM was paying attention.

It takes time to refocus selling and marketing efforts - but don't delay. Knowing where to refocus them is a critical part of the process (guessing wrong would suck) - but it's not the only part. You now have to re-learn the vernacular of the manufacturing sector - because there have been changes since you've played there last. Every sector has its own language, cadence, and way of doing things. Making sure you have mastered them is what separates those who sell from those who spin their wheels.

The guy making huge buying decisions today was looking for a job, taking a pay cut, or just trying to keep the lights on with no budget at all three years ago. Now he is the king, dictating what companies are coming along for his ride. Did you ignore him? He'll remember. Did you try to help him? He'll remember. If you show up now not knowing his language, he'll toss you out on your arse, and you'll remember.

How many companies are still over-weighted on government spending, simply because 3 years ago the ONLY one spending any money was the U.S. government? The data says those days are coming to a crashing halt (regardless of how stupid the idea of printing new money is to support said effort). Common sense should tell you that the U.S. cannot continue to run at such outrageous deficit spending, and clearly IT will suffer (along with the rest) - but just how aggressively have tech companies altered their plans to diminish government sector targets and made the move back to manufacturing? Not many, I can tell you. It's hard to get people to see the forest through the trees sometimes - even when the data stares them in the face.

The bigger truth is: smart companies don't spend time figuring out where the ball was - they attack where it's going to be.

You can read Steve's other blog entries at The Bigger Truth.