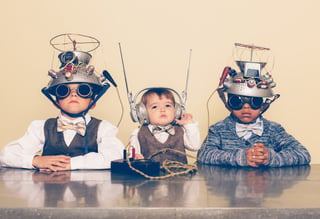 Microsoft Build is aimed at developers. From the presenters' dress code of jeans and tight polo shirts or T-shirts, this much is clear. The expectation is that attendees are here to learn to use a broad portfolio of Microsoft software and cloud resources to create new applications. The keynotes were a mix of genuinely inspiring, even life-changing possibilities and the lines of code that were used to make it happen.

A top-level theme was" cloud’s new edge," or rather the combination of an intelligent cloud with an intelligent edge. Since I've been writing for a while about how the battlefield for cloud isn't resource capacity per unit cost, but rather the tooling for integrated and assisted analytics, this idea wasn't a big surprise to me. See a few example blogs here and here and here.

Yet Microsoft is doing far more to extend cloud and infuse it with intelligence than I knew about. Their own developers have gotten ahead of their marketing, which is a rarity amongst technology vendors, and in this case made for an eye-opening conference. One example is the Azure IoT Edge service. Microsoft demonstrated an intelligent office scenario where a voice-activated assistant continued to make common collaboration and project tasks easier for the knowledge worker. They have built applications to leverage multi-device, AI, and serverless capabilities, and encouraged their audience to follow this lead.

Another capability showcased was a "reality-as-a-service," leveraging pervasive tech to grab live video streams, build digital twins of objects, and perform reasoning and rule-based actions on a physical environment, e.g., tracking assets in motion. A workshop/construction site illustrated how not only could you find tools, but also avoid accidents and enforce behavioral policies on workers. Slick.

Similarly, Microsoft wants to enable developers for both consumer and enterprise contexts. Whether or not you are comfortable with the idea of an all-Microsoft world, it's hard to argue that the offerings didn't complement each other very well.

The other big theme was artificial intelligence (AI) everywhere. Harry Shum outlined an AI-driven world, maintaining that we are at an inflection point, and that AI will be the biggest accelerator in human history. He bragged of a 152-layers-deep neural network with RESNET for computer vision, delivering winning image recognition. Then he showed how AI was being applied to products, including PowerPoint for assisted design, a Switchboard app offering speech recognition with a "better than human" error rate of only 5.8%, and a translation app for eliminating language barriers which could handle in person conversations in real time. The focus on a conversational user interface for applications will be interesting, and open up accessibility for any user, not just tech savvy ones. I've already noted this with my kids interfacing intuitively with Google Home, but Microsoft is expanding this surface area to all kinds of products.

To make it happen, Microsoft has AI engineering and AI research now united in one organization, with somewhere over 5,000 staff. Offerings now include a range of cognitive services APIs for Vision, Language, Speech, Search, and Knowledge--in all 29 APIs now, including launching Video Indexing and Cognitive Services Labs this week. Developers won't need to design complex models, they can just upload or connect data sources and let the cloud services figure out the hard maths.

Data platforms and databases weren't overlooked, even if they weren't the central themes. Microsoft emphasized choice and elasticity, as well as calling out SQL Server 2017 as intelligent, fast, secure, and durable. New functions include adaptive query processing, and in-memory, in-database machine learning with R or Python. They outlined a new "semi-truck-less" Azure database migration service to move SQL Server and Oracle to their cloud. Microsoft now also offers new relational database services for Postgres- and MySQL-as-a-service. Perhaps the most interesting was a new "data at planet scale" database, called Cosmos DB, which can scale to any need, from gigabytes to petabytes, from 100s of transactions/second to millions/second. This globally distributed, multi-model database is good for document, graph, and other NoSQL-ish type use cases. Microsoft really wanted to call out the Cosmos DB service level promises for high availability, latency, throughput, and consistency, plus tunable strong versus eventual consistency.

Ok, enough said perhaps. As noted, Microsoft is doing a lot more than the market might have known or even suspected. Time for the company to be a bit more vocal about its offerings. There is a lot for developers (and businesses) to like.