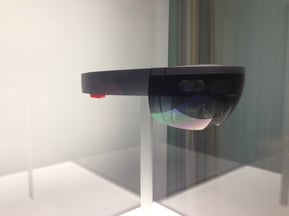 Microsoft’s Build 2015 conference in San Francisco was the focus of a wide variety of application development announcements. While Microsoft’s Universal Windows Platform would rate as one of the most important announcements of the conference, Microsoft’s HoloLens stole the show when it came to visual impact and astonishment. While Microsoft is being unusually tight lipped about when the HoloLens device will be made available or its price, their objective at Build 2015 was to create a spectacle and solicit some carefully orchestrated developer feedback. Although Microsoft refused to talk about what went into the development of HoloLens, they did allow us to demo it in a highly controlled setting.

Under the illusion of extraordinarily tight security that even Obama’s White House would be envious of, I was first allowed to photograph a HoloLens that was carefully suspended in a display case. After shedding all photographic, recording, and communications equipment, I was ushered through multiple sets of handlers, a maze of holding areas, a dedicated tutorial, and optical measurements before being individually escorted into a dimly lit room where I would be fitted for and begin to use a HoloLens. Microsoft’s objective was to create an aura of shock and awe about what they had just developed. In this regard they succeeded.

HoloLens operates using one set of stereo optics that monitors your physical environment and a second set of stereo optics that projects holograms to the user. These two domains are joined so that as the user looks and walks around, holograms are continuously adjusted as if they were part of the physical environment. The science behind this is admittedly complex and Microsoft deserves immense credit for this achievement. The HoloLens is controlled by gaze, gesture, and voice. Gaze (where you look) is analogous to moving a mouse and either gesture or voice commands are analogous to selecting (clicking) or typing.

The complexity of developing 3D objects cannot be underestimated. Creating a realistic 3D model is extremely expensive and this will clearly be one of the gating factors that limits the utility of the HoloLens. So the success of HoloLens is largely tied to 3D model development activities that are beyond Microsoft’s control. This situation cannot rest easily with Microsoft. While the use of 3D modeling in business is accelerating due to the improvements in cycle times and product quality, design development is currently an expensive proposition that will slow the adoption of HoloLens.

It’s hard to see HoloLens as a consumer product because there is no material portfolio of 2D and 3D objects that would encourage its use. While it’s less of a stretch to see HoloLens as a commercial product, its utility is determined more by the qualitative assessment made by the user for how the virtual and physical worlds intersect. Since Microsoft still has work to do on how 3D virtual objects are rendered in a physical world and the availability of complex 3D objects is an unknown, adoption is likely to be slow.

However, the next time I’m in the market for a new car, wouldn’t it be nice to simply put on a HoloLens, walk out into my driveway, pull up a 3D rendering of the car I’m interested in, try out different colors and options, walk around it, peer inside it, and see how it would look sitting in my driveway.