Microsoft Windows Is Just an App 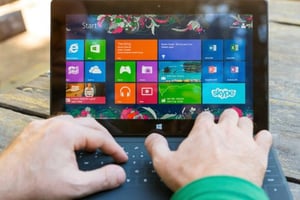 Look, there is no denying that Microsoft Windows has a massive footprint across the globe and has been the primary endpoint operating system that companies have relied on for decades. Heck, as much as I personally sometimes try to move over to other platforms like Mac OS or Chromebook, I find myself tied back to Microsoft Windows at some capacity. The same situation holds true for businesses as they continue to use Microsoft Windows because they have to, but the usage and interest of alternative solutions compounded with truly amazing capabilities on smartphones and tablets opens the door to create an enlightened end-user experience and improved productivity.

First, let’s clarify that Microsoft Windows is not dead and that Microsoft has made significant strides forward with Windows 10, a top quality experience on its Surface devices, and improved modern management approaches. However, it’s rare that I see the Microsoft Windows footprint inside a business growing. Internet Explorer is shifting to Chromium-based Edge, most new applications are not being developed to run natively on Windows, and the consumer experiences on Android, Chrome browser, Chromebook, iOS, and macOS are all impacting the future of the workspace.

The Microsoft Windows App in a Workspace

At ESG, we have been covering the value of a modern workspace for years: ESG's In-Depth Mobility Perspective into a Workspace. We even went as far as to demonstrate Microsoft Windows on a Google Chromebook Hosted at Amazon. The key point in taking a modern workspace approach (which, by the way, on the surface is really as simple as a dashboard/portal of apps) is that an end-user can embrace the new while still maintaining access to the old. This means that within a workspace, Microsoft Windows and Windows applications are just an app/icon within the workspace.

How Can Businesses Address the App Gap?

As businesses embrace more SaaS and applications designed for mobile devices, the benefits of a workspace approach begin to shine. But, IT still needs to fill in the gap to provide access to legacy applications that are often knitted tightly to the Microsoft Windows OS. Here are some approaches that validate the shift to a workspace and are worthy of exploring:

It’s important to recognize that the above list can not be compared apples to apples. Citrix and VMware are the most mature solutions that both take a similar approach. Amazon has impressive usage and momentum of its services, but doesn’t yet have a wrapper around multiple services to provide a unified solution across services and hasn't yet dipped into device management. Microsoft is on the list to show that it has decided to jump on board with providing a cloud hosted desktop, but I have to believe that Microsoft prefers Windows 10 to be the workspace whether it is local or cloud hosted. Google seems to be inches away from making a legitimate push into the enterprise if it can get comfortable with the fact that a legacy world will exist for the foreseeable future and it needs to support Microsoft Windows apps more extensively by leaning in further with partners like Cameyo to fill the app gap.

This market is far from being settled as businesses slowly get a handle on a workspace approach. Microsoft Windows isn’t at risk, but it's getting tucked in as an app inside a workspace, which does diminish some of the direct value of the Windows OS. This also brings into question how strong of a bite applications that are designed for Windows will have in the future and how important O365 is to Microsoft’s future.