Microsoft Windows on a Google Chromebook Hosted at Amazon

Chromebooks as a viable end point device? Why not?

One of the very interesting developments that I’m closely tracking is the use of Google Chromebooks in the enterprise. Google has nice traction and use cases in the education market, but it’s the potential growth in the enterprise that intrigues me, since the Chromebook could stand to be very disruptive alongside other laptop OEMs and could be the exact onramp that Google needs into the business environment. 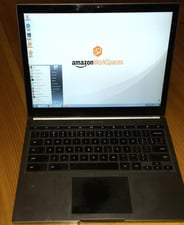 So, here’s the $64 million dollar question: how can business use a Chromebook while still maintaining access to Windows based applications?

To quench my curiosity, I went ahead and performed a little experiment. The first step — spin up a Windows workspace on Amazon. This process is extremely simple using the Amazon Workspaces service and, with a few clicks, I had created a basic Windows desktop complete with a number of Microsoft Office productivity applications. Step two — install the Amazon Workspaces client on the Chromebook. Step three — log on. I have to say that the setup was quick and simple. The Chromebook works well, and is an environment that will pass the litmus test for employees that need to access Windows applications.

My little experiment proved to be invaluable in understanding how quickly a Windows desktop can be built on Amazon — and the usability of running Windows on a Google Chromebook. It’s clear that businesses have some interesting endpoint, productivity apps, and workspace hosting choices ahead of them that include:

So while I have my doubts that the exact scenario I ran will become commonplace in the enterprise, it does call attention to:

And depending on how any one of the above (or combination thereof) play out, this might ultimately affect the ways in which we can choose to work.

On that note, please let me know if you have any examples of Chromebook use in the enterprise, Amazon Workspace deployments at scale, or projecting Windows applications. Would be great to compare notes.