My Take on NetApp Insight Take Two in Berlin 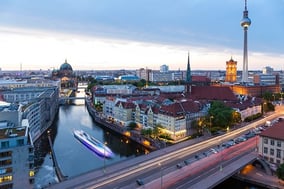 The importance of both hardware and software was starkly evident in my journey to Berlin for this European installment of NetApp’s Insight partner and customer event; first it was hardware that kept us grounded at Newark as the refueling of the plane wasn’t working…and then software took its turn as the whole of the New York region’s air-traffic radar went down. Now, if only I and my fellow passengers could have been re-planed and re-routed via some “transportation fabric” a la what can be done with data under the NetApp Data Fabric umbrella!

It is not long since the Las Vegas Insight event and so I don’t intend to duplicate the main product comments from then—you can read my blog and watch the ESG On Location video with my colleagues Scott Sinclair and Jason Buffington to get a recap.

Some of my main thoughts from this Berlin edition of Insight can be found in this new video…which also includes a couple of minutes of an excellent market, NetApp, and positioning summary by Dave Hitz, the founder of the company.

So, while Vegas was just weeks ago, it is amazing what does change in the world at large; while the two things I’m about to mention are clearly poles apart in nature, each of NetApp’s conferences happened to coincide with a huge news event. The terrible terrorist attack on Paris happened just a day or so before Insight attendees were traveling to Berlin and was clearly the news story for the whole week. Joining in the pan-European minute of silence from a usually manic “Insight Central” (Expo) floor was somber—and important—for sure. In a very different type of news, a month or so prior, the Vegas event started on the day that Dell’s intended acquisition of EMC was announced—if you have not already done so, I highly recommend reading ESG’s market research on how the market is really viewing this, as—assuming it goes through—it only makes NetApp’s drive to change—both itself and how it is perceived—more pressing.

A few more insights (pun intended!): In my closing comments of the Vegas video, I balanced enthusiasm for the Data Fabric vision, evolution, and delivery with a comment about NetApp having great plot elements but needing to tell its story better. Even in the passage of the last few weeks, I can see improvements in that, but even great movies need great trailers to maximize the “bums in seats.” Being at a vendor event clearly brings out the “choir” (or, to extend the analogy, devotees of a particular author or director), and so it can be a tad misleading for the efficacy of the story.

There is indeed an irony that both the sophistication and the simultaneous simplicity of a solution like Data Fabric can get lost in the standardized and limited semantics typically deployed in the IT and data storage/management industries. To be clear, Data Fabric is clearly data-management-goodness, but the terms used to describe it and its value can all-too-easily sound a bit like those used by everyone else (even when those others may not have anything remotely close to a Data Fabric capability). So I think NetApp needs to talk about what it is not and emphasize why it is different just as much as it espouses the promise its Data Fabric holds...after all, when so many of its competitors are walking a different walk (convergence especially), NetApp must talk a different talk to ensure its "book"/"movie"/data management construct gets maximum attention.

Mark: So here I am, it's NetApp's Insight in Berlin. Just enough break in the weather for me to come outside and actually do this introduction. Let's get inside and see what this conference is all about.

The event takes place at City Hall in Berlin, which is a sprawling convention center. But it's almost kind of a metaphor for the data and storage industry. It's big, it's labyrinthine. There are channels everywhere, we saw about the clouds outside, and there's even occasional bottlenecks.

So whilst there may be a little gray outside, in here it's all blue and white. Blue for NetApp, of course, and white for the myriad types of clouds that there are these days. And that, of course, is a big part of the story here this week. But all the physical manifestation around me, all the detail that people are talking about kind of goes slightly against the grain of the flexibility and dynamic nature of IT that both vendors, users, and partners have to deal with. So let's investigate that architectural challenge and change just a little bit more.

And here's some architecture, the Brandenburg Gate. Now there can be no more somber, evocative, but ultimately appropriate place to talk about breaking down barriers, literally bringing down walls. Talking about incorporating, allowing, acknowledging different approaches to doing things. And really when it comes to it, that's what the data fabric from NetApp is also all about. It's about breaking down the barriers between different systems, different approaches to data management, and ultimately allowing a very heterogeneous, agnostic, and inclusive approach to data management.

And this isn't just about one thing like scalability or protection as you might think. It's about control, optimization, integration, and ultimately creating a dynamic and successful environment, very much as we have in modern day Berlin, and very much as anyone in IT would want for data management.

To find out how NetApp is beginning to mold itself around these changes I got a couple of minutes with Dave Hitz, the original founder of the company, to ask him actually why he's still here, and more importantly what pleases him about the ways that NetApp is changing from being a company very much associated for the last 20 years of IT and data storage to being one that is associated with the contemporary world of IT and data storage.

Dave: I like doing new stuff. If NetApp was the same place for, it's been almost 25 years, and if I had the same job, I would definitely not be here. I started as a programmer and I ran engineering, and I learned a lot of things running all of engineering for six years. One of the things I learned is I don't want to run engineering anymore.

What's interesting to me is the cloud is just changing everything. I think about...when I look at all the different trends, there's all these trends and you just look at years of waves of new technology: mainframe and AS400 and UNIX and Windows, and then Linux is going to kill Windows, and Windows is was supposed to kill UNIX. None of them ever kill the previous one, you always end up adding them to the toolkit.

And so my belief, when I think about how is cloud going to play out: it's not going to kill all the rest of those technologies, it's going to join the toolkit. And the big challenge of cloud is managing the data. How do I get the data from UNIX to Windows? That's what we did in that era. We made a multiprotocol system, and it can be either UINIX or Windows, and go either way. And our goal is to do the same thing again with the cloud, help people.

In fact, on the main stage here at Insight, what I'm demonstrating with Joe Carodonna is your data is sitting in an Amazon cloud in AltaVault format, and you want to re-instantiate it in an Azure Cloud in clustered ONTAP format, because that's how you can use it. Let's just say you've hired some people that look at the data and they like Azure. And we can, just with a drag-and-drop user interface, get the data from Amazon to Azure. And that's the user interface part of it.

If it's a big chunk of data, terabytes, the bandwidth isn't there to move it, and so then we have solutions like NetApp Private Storage to sit next to the cloud and do failover from the one to the other or manage your usage patterns.

So let me give you my assessment of Insight. The data fabric message was sort of future, big, and not completely credible because we were just talking about it. And when I look at the demos that happened here at Insight, when I looked at the demos yesterday, we saw almost all of the stuff we talked about last year, we saw it as things you can buy now. And so is it all of our business? Of course not. Is it even completely the final answer? No, not that either. But I feel really good about the direction we're heading and how we're helping customers.

Mark: We covered Insight in Las Vegas, as well, so obviously a lot of the product detail was covered in the video, in the reports, in the blogs that we did after that. But I think the unifying aspect both of that event and this, and gosh it's only a month or so ago, but the world moves on, is that of change. There is still enormous change going on in the ecosystem, the Dell-EMC thing is still going on. And it's very clear from this event, we heard from Dave Hitz, some of the changes that NetApp is making broadly to work and be relevant in the new contemporary IT space.

I think it's very clear from the attendees here, from all the sessions and user experiences, conversations that I've seen and had here, that there's a very committed group of NetApp customers here. So we've got change in the marketplace, we've got change in what NetApp does do and is doing to address that. And the last part of the change, which is really important for NetApp to ensure its future success, is to make sure that the rest of the market, customers, prospects alike, for this company understand the depth, breadth and relevance of those changes.