NetApp Insight: Both a Conference Name and an Apropos Comment  (Includes Video) 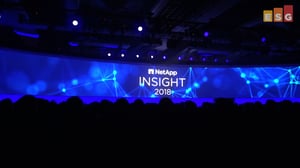 NetApp’s 2018 Insight event was nothing if not engaging: not just for what this vendor is doing (in a traditional announcement and product sense), but for what it is rapidly becoming (in terms of its place in the burgeoning information-based-world).

Of course, NetApp’s impressive – and continuing – recovery and re-formation is only possible because of its excellent execution over the last few years: Focus, finances, and futures have been the emphases, and they are paying off. Take a look at ESG’s On Location video to get a feel for this year’s event and some key takeaways.

NetApp has been espousing its Data Fabric concept for four years now, but increasingly it is being made manifest. What makes it credible is the fact that NetApp is not beholden to one ‘side’ or the other in the big “on-prem versus cloud” debate; in fact, NetApp itself would never write that last phrase with a ‘versus’ in it. And that’s the point. You are just as likely to see NetApp on the main stage beating its chest about being #1 in AFA shipments, as you are to see it joined by the VP of IBM Cloud! [yes, really…]. You are just as likely to hear it re-casting the HCI acronym as meaning “Hybrid Cloud Infrastructure” as to listen to its future musings about a project called “Alchemy,” which is designed to get production usage out of cloud backup data. The connection in all these things is data…data that is optimally placed and used. George Kurian even mused about a comparison in which NetApp can be seen as the “Intel inside” equivalent when it comes to data. That’s obviously a high aspiration – but it’s not by any means unrealistic, given (a) NetApp’s heritage and (b) the lack of other vendors that are really – and solely - focused on this. What was once becoming a potential Achilles Heel for NetApp (being a storage pure-play) can actually become its greatest asset (as a data fabric pure-play).