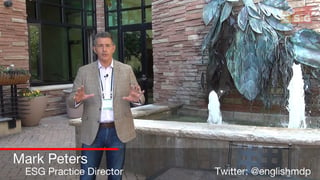 Warmer weather in the US also means the heating up of what we often call "show season." While it was intentionally not a big audience (after all it was just analysts rather than an end-user event), the NetApp event this week in Boulder, Colorado was certainly engaging.

Fresh off of some much-improved business results, the NetApp team was justifiably proud of where it is today. And that's not just about its revenues and finances, it's also about vision and execution. And those things - together with a willingness to embrace change - are what enable organizations to achieve longevity. With NetApp celebrating its 25 year anniversary, knowing the ingredients to a long life is especially vital. After all the average life of Fortune 500 organizations is only somewhere between 40 and 50 years....and roughly 50% of the 1999 Fortune 500 was gone within a decade!

After, admittedly, some tough times, NetApp has now moved beyond stabilization to show renewed vigor together with relevance to where IT is now, and where it is headed as we speak. Whether it is NetApp's already-way-more-real-than-you-imagined Data Fabric, whether it's the increasing pragmatism within its sales model and focus brought be a new Cloud BU, or whether it's the pleasing clarity of its new "Data Driven" tagline, NetApp is portraying a purpose and vitality that seemed lost just a few years back.

We shot a short video at the event to give you our insights: in this video we highlight the newly announced NetApp HCI (with a little help from Dale Degen of NetApp). Of course there were many other news items (indeed, just a day after the event, NetApp's enhanced relationship with Microsoft Azure also became public) but HCI had represented a clear gap in the portfolio so we decided to give it the spotlight for today.

In his opening remarks, CEO George Kurian referred to NetApp's FY2017 as "one for the ages," and certainly improving the top, bottom and share price lines simultaneously - especially in the recent IT infrastructure market - is impressive. Assuming NetApp can execute against what it was showing and discussing in Boulder this week then it won't be the last time George gets to beat NetApp's corporate chest about its achievements.