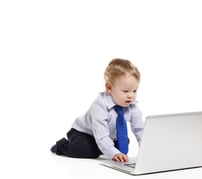 Age is a very interesting phenomena: there's the real numbers and then the relative aspect. "You're only as old as you feel" - as someone who's now having to check the last age-range box on demographic questions (certainly in ESG's own research!), I'm mightily relieved to hear that "60 is the new 45," or whatever! And we all seem sure that a human year equates to 7 "dog years."

IT vendors often follow a similarly advanced aging process. Let's face it (even though the modern industry is not much more than half a century old), most vendors we deal with now haven't made it that long. And the massive common companies we use all day - the ones we view as mature - such as Microsoft, Google, Amazon, and the like are way younger in years. The IBMs and HPs of the world are the rarities.

The flip side of this is that vendors have to "grow up" fast! Nimble Storage just recently surpassed 5,000 customers, has multiple mission-critical applications from significant orrganizations relying upon it, and has gone public....and it's only 7! I went to talk with Nimble's marketing lead, Dan Leary, about what he thought had allowed his company to grow up so fast.

So, now Nimble is at a very interesting stage...just like that late teenager - ahem, early adult - with which many of you reading this will be familiar: Full of promise, proudly independent, an impressive range of medals and certificates on its dresser, moved out of Mom and Dad's...but still not quite fully financially "sorted." And the next fascinating phase is about striving to make it to full maturity - whether human or vendor! - in a world that is increasingly complex, partisan, and demands that you keep growing up fast!

Mark: Today, I'm here at Nimble Storage. What motivated me to come and speak to them is their recent announcement of their 5,000th customer. That's a big number by anyone's reckoning. I spoke with Dan Leary, who runs marketing at Nimble and asked him what he thought had allowed them to achieve this.

Dan: Yeah, we're really proud of what we've been able to accomplish, and hitting 5,000 customers for us in about four and a half years was a really special achievement. I think what allowed us to do that was really having a platform that could address such a broad range of workloads and use cases. It goes back to sort of the founding principles of our company and our mission to build the world's most efficient data storage platform. That's allowed us to come in and solve problems, everything from running mission critical databases, Microsoft exchange, virtual desktop infrastructure, and we've been able to go from serving primarily mid-sized enterprise companies in the early days to increasingly now a significant amount of Global 5000 enterprises and cloud service providers.

Mark: The two other things I wanted to ask Dan were as follows. One, is from a business model perspective, if there's something particular that helps them with their success; secondly, the current storage environment is so much about Flash. I wanted his comments on how Nimble plays and adapts to that reality.

Dan: I think it's important as the products and the technology we built, it's the approach we took from the very beginning to reinvent the support experience for our customers. It started with the realization that we could build a platform that could literally take in, in real time, millions of sensor values from each of our customer arrays every day, that allows us to now proactively identify problems before the customer is even aware of them. The result is that over 90% of our support cases are proactively identified by what we call info-sight, before our customers are even aware of them. That has really transformed the experience with our customers, contributed to a huge increase in customer satisfaction. I think it's been a really major factor in the success we've enjoyed so far. There is no question that Flash has made fundamental impact on the entire storage industry. When we looked at the opportunity to build something that we call an Adaptive Flash platform, we recognize we had an opportunity to take an approach that was different from most of the others in the industry, that allow us to basically have a system that can span the needs of workloads that would previously need an all-flash array, or a hybrid array. Instead of our customers needing to deploy separate silos of infrastructure to support that, we built an approach that allows them to solve that problem within a single platform. We think that gives an opportunity to really change the conversation with customers and give a whole new opportunity to drive value within this organization.

Mark: So clearly both from what we know of Nimble, and also from the comments from Dan, the company has done very well so far, 5,000 customers said so, and has a continuing relevance to the contemporary market. It is gonna be really interesting to watch them now because this move from mid-size, middle-aged, teen-aged if you like company, to full maturity, is always a fascinating one to watch.