I recently attended the Open Networking Summit in Santa Clara, CA. While there, I took part in several sessions, and below are the common themes I encountered in those sessions and how they may all fit together into a single narrative.

During the event, I chaired a session on SDN-WAN. On the panel, we had three vendors (Packet Design, Pertino and ConteXtream) and one customer, Freewire Broadband, which described its use of Velocloud’s SD-WAN solution. The solutions described by the panelists were varied, with ConteXtream being NFV oriented; Freewire using a classic hybrid SD-WAN, but as a hybrid MSP user (as opposed to a class enterprise); Packet Design talking about WAN-Edge SDN and NFV in the data center; and Pertino delivering network services as a service in the cloud. By the way, did you know that Pertino’s name is based on Cupertino, the city in the Bay Area? It’s just like how Cisco is the tail end of the name “San Francisco.”

Only Freewire described the use case that I mentioned in a previous blog through their use of Velocloud’s product. The industry still hasn't figured out what to call this technology: will it be SD-WAN or Hybrid-WAN or Intelligent WAN or SDN WAN (the term used in this session)? Despite the naming confusion, all of the speakers addressed the importance of service insertion.

Ultimately, all users on the edge want to perform some form of service insertion or service orchestration. This illustrates that simple path optimization, although necessary, isn’t sufficient to do everything we need in real-world networks. Just as we all know that services provided by middle-boxes (network appliances) are important in traditional physical networks, people want to perform the same tasks in software defined networks in the WAN. 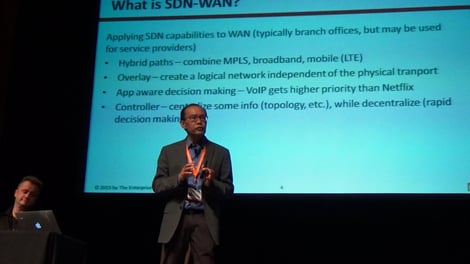 One session in the data center track was focused on OpenStack and SDN. This included a talk about network intent composition by Dave Lenrow of HP, which is a project with similarities to the group-based policy project in OpenStack and OpenDaylight projects that I've written an ESG brief on. The takeaway from this session seems to be a realization that the design of OpenStack’s Neutron project is not ideal as it was designed outside the mainsteam, but that’s all we have for networking today, and we’re not in a position to throw it away.

The project has made some strides in the past year to gain parity with the old Nova networking system (the previous OpenStack default networking system), and a variety of plug-ins have made Neutron work with other projects in OpenStack and commercial products as well. One interesting observation by Rob Hirschfeld of RackN was that with the adoption of IPv6, it can make SDN in OpenStack less relevant? There is less of a need to avoid having overlapping IP Addresses!

There's plenty of address space, so why bother? Encryption in IPv6 also competes with use of SDN to create an overlay. However, there are still many other uses for SDN. So will IPv6 make SDN popular? Time will tell, but that was an interesting eye-opener.

Another session in the data center track was SDN Solutions. This one was very vendor-focused, with speakers from Arista, Big Switch Networks, Cisco System’s Insieme Business Unit (aka the ACI group) and VMware (Nicira).

This one was a discussion of each firm’s products and approaches, but one common theme seemed to be the value of network automation as an SDN solution. As a member of the audience, I asked about the value of telemetry in data center SDN. It’s not just a matter of collecting telemetry data, but doing something intelligent with it, such as inferring what’s happening in the underlay, or even performing actions to reconfiguring the network in response. Cisco said that this can be a big area in the future, while others agreed that gathering basic stats is “table stakes”, performing automatic actions such as reconfiguration is still a way off in the future.

The closing panel was a broad discussion on the value of open systems and open source. Disruption was a common theme. The speaker from Dell, Arpit Joshipura, showed the four stages of evolving a network to become more open eco system. Chris Luke from Comcast described how they are starting to use OpenStack to support ther X1 product and that they are going to be supporting upcoming OpenStack projects for network services such as Tacker.

The speaker from Lightspeed Ventures, John Vironis, talked on innovation by startups, using Uber as an example (it seems to be everyone’s favorite example) and the fact that open source is the key way to innovation.  Neela Jacques of the OpenDaylight project talked about doing open source in pure way versus “open washing”.

The SDN Solution showcase worked hard to show interoperability between different vendors (NEC, Dell, Microsoft together in one booth, Brocade, Tellac and Elbrys in another, etc.) with an emphasis on carrier and NFV solutions.  In the data center side, we saw an example of rich network service delivery, with OneConvergence showing how they can take Cisco’s ACI with APIC controller, combine that with their own software, the open source Group-based policy code, a cloud based ADC from Avi Networks and taking that all together and deployed for a public cloud operator use-case. So here, we see some of the topics described earlier – network automation, service orchestration, intent policy, and open source, all rolled into one. 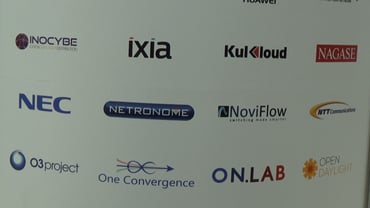 The Open Networking Summit has evolved to show more enterprise use cases in addition to the telcom use cases over the years. There was also an academic bent since the research oriented ACM Sigcomm Symposium on SDN Research (SOSR) was held concurrently.

In late July, we should see more open SDN systems at the OpenDaylight Summit, to be held in Santa Clara, CA.

Check out ESG's On Location video for the event, Impressions from Open Networking Summit 2015.