If there were any doubts that things might get a little weird at the OpenStack Summit, those fears were quickly put to rest when Boris Renski, CEO of Mirantis, trotted out on stage with a vodka-guzzling Russian bear during the day one keynote. In a refreshingly un-PC presentation, Boris took pot shots at Gartner, IT system administrators and even at AWS. A fusillade of brash open-source bravado speak. And the audience loved it; myself included.

In stark contrast to Boris’ presentation, Jonathan Bryce, Executive Director of the OpenStack foundation, focused on some feel-good themes, like how more than 2,300 developers across 345 different organizations contributed to the latest OpenStack release (Mitaka). Bryce pointed out that the vast diversity of the OpenStack community is one of its core strengths. And as I mentioned in a recent blog, the CTO of Volkswagen, Hans Muller, specifically referred to the collaborative strength of the OpenStack community as a major reason why VW chose to standardize on OpenStack for their enterprise cloud environment.

Muller made an appearance at the keynote as did two other OpenStack users from AT&T and SAP. Sorabh Saxena, VP of IT Architecture from AT&T, talked about how they are using OpenStack as their private cloud foundation to help enable a virtualized network architecture (VNF) that can support the massive data growth across their mobile phone network (up 150,000% since 2007). In another interesting use case, Nayaki Navkar, SAP’s Global Head of IoT (Internet of Things), discussed how OpenStack is serving as the foundational private cloud layer for SAP’s IoT offerings.

While these big company case studies are important proof points for the viability of OpenStack as a mission-critical, commercially hardened cloud platform technology, there seems to be a lack of similar success stories from smaller, more modest sized enterprise data centers. This is likely due to the fact that despite OpenStack’s momentum with the titans of industry, it is still looked at as a collection of loosely coupled open-source projects by IT planners downmarket.

Moreover, with most IT organizations struggling with getting their VMware and Microsoft private cloud environments to maturation, they can’t afford to introduce yet another, potentially more complex, cloud platform into their environment. 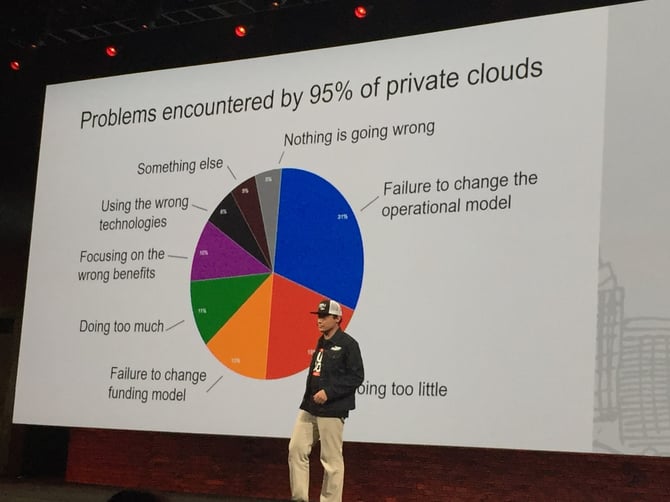 Boris focused on the private cloud deployment dilemma during his raucous keynote address. He pointed out that there are problems encountered in up to 95% of private cloud deployments with the main factor being a failure to change the IT operational model. He jokingly referred to developer “Ninja warriors” being constrained by booze laden VMware systems administrators. His point is well taken. IT's culture has to fundamentally change to a model where infrastructure operations aligns directly with the needs of their application developers, typically referred to as DevOps. Until these two camps are inextricably linked, organizations will continue to struggle with attaining the business speed and agility they so desperately need to stay competitive.