With typical understatement, no assertive flourishes, and a complete lack of competitive gauntlet-throwing, Oracle’s Larry Ellison just announced – separate but linked – enhancements to its overall cloud strategy. Well, actually no - of course not!! While the announcements were strategic, real, and compelling, there were flashes-aplenty of the Larry we have come to expect (even from a shelter-in-place, and rather-nice-looking, kitchen)…a feisty and assured red stake placed firmly in the increasingly hybrid IT landscape.

Nearly half the time was taken up with a reminder of Oracle’s progress with its Gen 2 Cloud and autonomous offerings. Mind you, the customer stories were genuinely impressive – it’s a somber [world] but decidedly good [business] time to be a foundational vendor to the likes of Zoom (moving 7+ PB per day!) and McAfee (handling 500k events per second!). Then we got to the meat of the announcements, each of which was bolstered by high-profile customer examples: 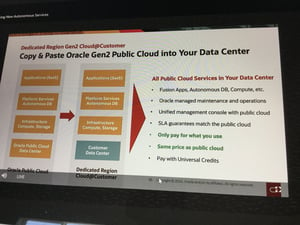 Think of the Autonomous Database on Exadata Cloud@Customer (I so wanted it to be called the “Eponymous Autonomous etc…”, but Oracle’s naming is always a precise mouthful rather than pithy and mellifluous!) as the on-premises database slice of an Oracle Cloud “pie” with the Dedicated Region Cloud@Customer being a whole pie just for yourself.

Converts to any IT cause can end up being the most evangelical and strident in terms of adding value; Oracle was hardly first-out-of-the-blocks on cloud…but just look at it now! Then again Google was by no means the first search engine, nor Apple the first to deliver a smartphone. So, being first isn’t always best. That said, while timeliness can be overcome, a lack of utility cannot (just ask Microsoft about search and smartphones!) and this is where the Oracle strategy in general – and these announcements specifically – shines. Autonomous Database is the full Database offering; the Dedicated Region is the full Oracle Cloud offering. These give users real full-value choices – not ‘rock and a hard place’ compromised options as currently offered by some other cloud providers.

Clearly these announcements extend Oracle’s commitment to cloud…but “cloud” as an overall IT approach rather than just a singular place or style. But they also extend Oracle’s commitment to its eponymous (see, I got the word in!) database, by making it easier to consume and use in pretty much any place and manner that a user wants. Both actions are part of growing Oracle’s contemporary relevance, allowing its marketing team to increasingly use a lexicon of “easy, proven, best-of-both-worlds, economic, one-throat-to-choke” and the like. The mix of the two announcements allows Oracle to continue and extend its intriguing play - not fighting, but instead fully embracing, cloud; and not embracing, but strongly fighting, competitive cloud databases.

Of course, a prime target-group for either offering is users who are compelled, for whatever reason, to keep their data/IT on premises – by regulations, executive preference, performance demands, or whatever. The simplicity of both offerings will also appeal to those without the appetite, budget or skills to do everything themselves. And the likelihood for users to consider Oracle’s Dedicated Region will be increased by the marketing efforts of the hyper-scalers (such as AWS, Google, and Azure) as they are all embarking on early-stage efforts to reach out from their cloud castles and into the on-premises world. Their solutions in this arena are not yet anything like as extensive, simple, or sophisticated as those from Oracle (and that’s without accounting for Oracle’s autonomous capabilities), but the trend is likely to grow the pie for everyone, providing plenty of opportunity for Oracle.

Oracle’s announcements mark a step-change in the on-premises cloud space, and its claim that no other vendor has come out with anything akin to its autonomous database is not only true but also – bolstered both by its strong portfolio price/performance and underlying corporate business strength that allows it to compete broadly and over time – is showing it to be a real force to be reckoned with in the cloud arena.