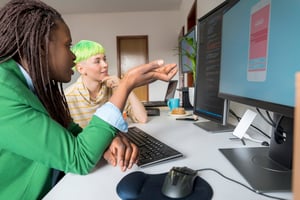 It would, surely, be a perfectly reasonable assumption that if you employ application developers, you’d like them to develop apps!? Indeed, if you are an application developer, one might assume the same thing applies!? Yet all too often these valuable individuals are constrained by the need to tinker with their IT infrastructure and environment in order to be able to do their Job #1 (or work with their IT colleagues on it….and/or moan…and/or escalate – but it all amounts to the same). While we’re talking assumptions, the uninitiated (hands up, I think that included me until I recently got set straight) could be tempted to think that app dev types are naturally drawn to such endeavors – whereas the truth is that they end up doing it, whether or not they like it, because they have to.

That just changed. Yesterday, at its Oracle Developer Live digital event Oracle introduced the not-niftily-but-nonetheless-accurately named “Oracle Autonomous JSON Database” (AJD). Now, rather than having to have application developers hamstrung by things that have nothing to do with their actual application development process—such as worrying about whether there’s enough storage or compute resources, plus busying themselves tuning databases and twiddling with management knobs—the new AJD takes care of all these distractions with automation, machine learning, and artificial intelligence...and thus enables an organization’s skilled and scarce developers to focus on making the best applications possible - essentially delivering a new way to fast track JSON-fuelled application development by clearing the path for innovation.

That’s it in a nutshell. But there’s more of course. As Juan Loaiza – Oracle’s EVP of Mission-Critical Database Technologies – put it in his keynote yesterday: “The Autonomous JSON Database is a new cloud service built specifically for JSON-centric application development…When you use a JSON database you can, with a single click, add relational database capabilities to transform it into an Autonomous Transaction Processing database that has both JSON and relational data in it.”

There are some key takeaways to appreciate in this announcement. We all know that good old structured relational databases are great for transactional work; but the world has turned to JSON big time over the last few years for the value its semi-structured approach can deliver in terms of processing patterns and thus helping to truly transform customer experiences across many fields and industries. But these two worlds have remained – to an uncomfortable and sub-optimal degree – separate. If this was global semantics, it’d be like having those in the know about JSON, and a parallel group that thinks I have now repeated a typo many times over and that I mean to write “Jason” – and wondering whether I’m referring to Momoa, Bateman, or the guy from Friday The 13th! The irony is that these two worlds – I’m back on IT now! – would be even better if they worked together. And now they can. Back to those key takeaways:

Oh, and as has been Oracle’s wont for ages, it’s all super-high performance; furthermore, as seems to increasingly be Oracle’s wont more recently, it is all super cost-effective (Oracle quotes comparisons to MongoDB Atlas that are based on publicly available data and which boil down to twice the throughput for 30% less cost). There’s even a small free-for-ever version for users that want to play, experiment, and get comfortable.

Of course, innovation from vendors is constant, and comparisons are the name of the marketing game. What matters more than either of those is whether users want what is on offer. And ESG has a stack of research that backs the definite market applicability and therefore likely attraction of AJD. For example, our 2020 Technology Spending Intentions Survey research found that nearly 1 in 3 organizations believe improving data analytics for real-time business intelligence and customer insight is one of the business initiatives that will drive the most technology spending at their organizations this year. Furthermore, ESG's 2019 State of Data Analytics research revealed the opportunity for something like AJD – two-thirds of organizations end up having to integrate between 4 and 9 data silos to yield reliable outcomes, and, while fully 60% organizations use a mix of structured and unstructured data for analytics, 45% analyze them independently of each other! In other words, a lot of data from different types of databases.

With its Autonomous JSON Database, Oracle looks to have something that can help businesses both operationally and financially…allowing faster and better insights to be generated from more accessible, and essentially converged, data…whether by a DBA or an app developer. It offers organizations a way to consolidate their database footprint while embracing a data-driven future. And it will reduce the distractions that plague app dev teams….for sure making them more productive; and maybe even allowing them to finish JSON-based developing and go experience the wide world of Jasons!