Pure Accelerates its Move from Being Purely About All-flash Arrays 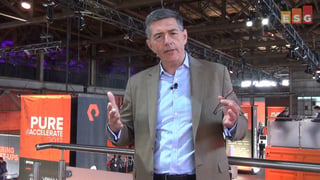 Pure Storage held its "Accelerate" event in San Francisco earlier this month. The descriptor "in San Francisco" is accurate but doesn't really do justice to the actual location: Pier 70 was a very special - no doubt challenging, but certainly worthwhile - place to hold an event of this sort. Indeed Accelerate will be the last event that happens at Pier 70, as it - and the whole area - is due to be cleared for redevelopment.

With a degree of sadness to see something so proud and once-useful be done away with, it was nonetheless a fitting place for a company with a "disruptive gene" like Pure to stage its event. I took the chance to produce a video blog of the event - which includes interviews with both Brian Schwarz and Matt Kixmoeller of Pure - and it encapsulates my key insights and views from the event.

As mentioned in the video, part of the symmetry of the location for Pure was in supporting its assertion that old infrastructure must be replaced....as it would say, in terms of modern, "next generation" IT (the world of deep learning, AI, etc.) "you can't get there from here" using older infrastructure. Hence the foundation of Pure.

But this event was strongly about more than just the foundation of Pure, despite the myriad software architectural enhancements that were announced; indeed in a sense it was actually (to keep the theme of regeneration going!) about the end of old "stage one" (all-flash array) Pure and its "stage two" rebirth as a "Data Platform" company. This realization - and embrace - of the need to be way more than [essentially] a one product company is fundamental to Pure's future. With a lack of historical architectural IT millstones around its corporate development neck, plus its growing "raving fan" user-base, and a committed and patient investor/stockholder community, the move looks to have every chance of paying off. Moreover, the fact that the company is on track to achieve $1BN annual revenue - the first independent data storage company to achieve that since NetApp a couple of decades ago - suggests that it knows how to execute.

While the "New Possible" was the theme for the Accelerate event itself, I also took it to be positively ambiguous.....and perhaps apply to the vendor itself. What is eventually possible for Pure seems to be less about its own abilities to execute, as opposed to what the rest of the incumbent competitors do - and for Pure that's a huge compliment, compared to the many (no pun intended) flash, crash, and burn startups that we have seen over the years.